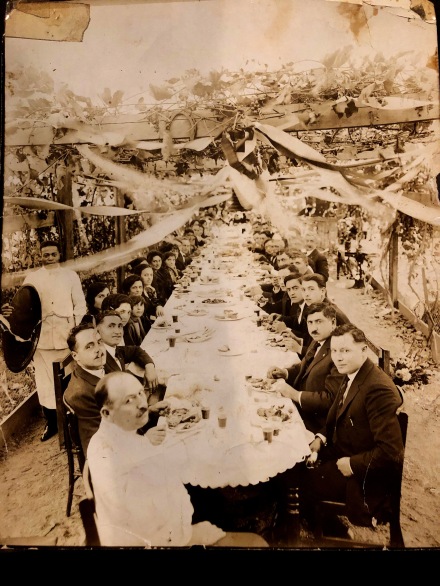 Pam (Family) Photo Post: As I sit down to write today I am unsure really what I want to say about this photo. I was fascinated by it when I saw it for the first time over Thanksgiving. I have no memory of seeing it before. It is a photo of a photograph which is in very bad condition and over-exposed in part (I took it on my phone and Kim has darkened it slightly for us here), but it manages to be fascinating nonetheless.

This photo was taken in the yard I grew up as knowing to be my grandmother’s, but it was a home (and yard) that at one time housed several families and generations of my family. My mother grew up in the two story house attached to it, with her brother and parents on the ground floor and an aunt, uncle and cousin on the second. One of the grandmothers lived with them there at one time too. I wrote about the house aways back when some photos of it came my way. (That post can be found at My Grandmother’s House here and I also wrote about my maternal grandmother, and her kitchen in Ann’s Glass which is here.) However, here is the familiar yard, several generations before my childhood, recorded on the advent of the wedding of my great-aunt Rose (Ro’ or Ro’ Ro’ to me as a kid) and a glimpse of this opulent, if homespun, backyard celebration.

My mother tells me that this table, impossibly long and which literally disappears into the photo horizon, is set up under a grape arbor decorated here with festive bunting, which supplied this (very Italian) family with the grapes to make wine. The arbor was long gone by my childhood, my mother says it was the victim of a jolly rodent population attracted by its bounty and the nuisance convinced the later generation of denizens to dismantle it. Every inch of the yard, less than an acre by my reckoning, was devoted to producing food for the family – fruit and nut trees, a vegetable garden, chickens. This yard, hunting and fishing, extraordinary cooking and preserving skills, kept this family fed through thin times, including my mother’s childhood which includes the far end of the Depression.

The family owned a bar which the women of the Cittadino family (at a minimum my great-grandmother and her daughters) cooked for, in addition of course to feeding and taking care of the family. When I look at this photo my mind reels with thoughts of the days (weeks really) of work that must have gone into this celebration. I would imagine that many hands helped in a variety of ways, but there’s no way to imagine it wasn’t an enormous job for those at the heart of it. As I look at it I am fascinated by how the men are grouped at the end of the table closest to us. No one has identified any of them specifically. Frankly, it looks like a tough group!

In general the men on this side of the family are dim in my memory and mind. They seem to have largely died on the young side (a variety of reasons, inherited heart issues among them) and therefore my childhood self never met them or at least didn’t know them long enough for there to be much of an impression. On the other hand, the women, an undeniably strong group of women, loom large and Ro was the oldest of that clan. I have vivid memories of them. As I unpack more of these images in future posts I will likely write more about these strong willed sisters and what I know of them.

These photos come to me via a cousin (second cousin to me) who has unearthed them as she starts cleaning out her own version of an ancestral home. She has lost her mother and significant other over the past year (the latter quite unexpectedly), and she has drifted to staying with my mother, who since my father’s death over the summer is largely alone in her house – although so many friends come and go I often think it is her own version of Grand Central Station. Nonetheless, family is different and it is a poignant reminder that it is an interesting thing, which can at times expand and contract as needed. It unfurls further than the eye can see, back into the past, and indefinitely into the future. 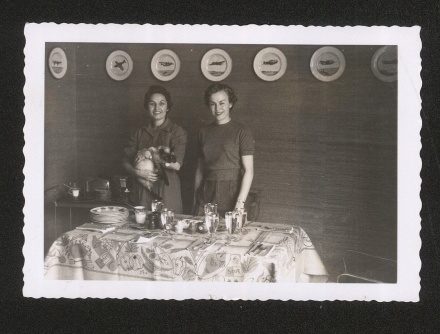 Pam’s Pictorama Photo Post: Quite frankly, I saw those plates on the wall with the airplanes and kept being drawn back to this photo which I ultimately purchased, uncontested, on eBay recently. There is no writing on it and I am a fan of the mid-century ruffled border of the photo. While there is no particular reason to believe that the event these women are anticipating has anything to do with the airplane plates, I keep going back to them and wondering – fascinated by the way they are strung precisely across the top part of this room. I love collecting and enjoy seeing documentation of other people’s evidence of it. This is a nice example. I like the idea that someone collected these plates and then decorated this room with them. Splendid.

I did some quick research and I was unable to find these actual plates – the plates in the photo have a distinct horizon line and simplicity which I cannot find in another set. Similar plates were (or are) made by several different, mostly British, companies. UK eBay is full of variations, but the Davenport Wings of Fame plate series is the one that comes up first and most. I share those below, each with a month of the year. 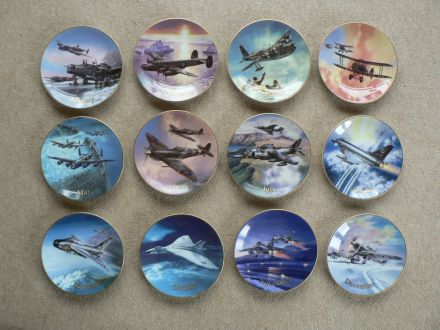 My favorite is March’s Rescue at Sea. (They evidently have names, perhaps on the back?) 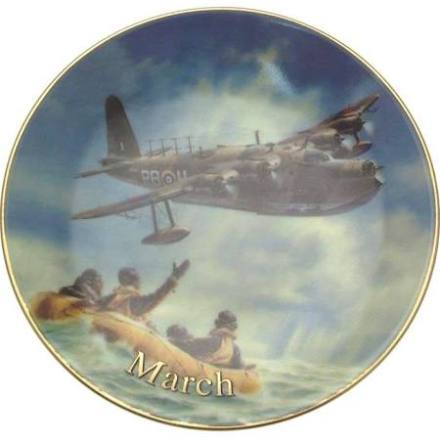 I like the plates on the wall of this photo better than these, which in all fairness appear to be slightly cheesier. There are seven on the wall in the photo and it does beg the question of if they are an earlier version of this plate of the month series. There would in theory be more or less just enough to go around this room.

This smallish table somehow manages to have eight place settings on it which seems ambitious – although I think I have had six people eat around our flat files so I guess one can do anything if a bit creative. There is a general festive sense about the scene, and it is easy to assume that it is documenting the anticipation of a happy occasion. The Siamese cat, who seems to have a grouch on, is the only exception to an otherwise jolly scene, but we know how cats can be – you can’t judge general ambiance by them. The two women are attractive and seems to be genuinely happy, not just smiling for the camera, and who (besides kitty) can blame the one for scooping up puss for posterity in the photo? From the clothes, make up and general look I would put this photo in the late forties or early fifties. My guess is that it was indeed a lovely day.