Pam’s Pictorama Post: Today isn’t quite a toy post, but I guess we could label it a premium post, which is a genre I explore not infrequently, usually in my quest for interesting cat related items. (A favorite post about Corbin pin trays depicting cat heads can be found here, and the more recent acquisition of my Feed the Kitty bank here.)

This little bank was acquired last weekend on what may be our final trip to the store Obscura Antiques and Oddities in the East Village. I was sad to learn recently that they will be closing at the end of the year, a fact I discovered via Instagram where a parade of visitors are paying their final respects and posting them. Evidently it is more a decision about wanting to do something different than about raising rents, but I was very sorry to see this as I have made it my premium choice for expeditions celebrating my birthday or our anniversary annually. A truly great day is pairing a visit there up with a trip to the The Antique Toy Shop in Chelsea. (Some of my other adventures and acquisitions at these establishments can be found in prior post here , here and here.)

It is a bit boring to bemoan how all the interesting places for poking around in old stuff are disappearing. It is just a reality of the way we live, especially in fast moving Manhattan where things seem to come in go with an alarming rapidity. But it saddens me, as poking through the detritus of lives past is one of my great joys. However, I try to be philosophical about the general entropy of retail in Manhattan.

Obscura Antiques and Oddities in the East Village when we visited last week. I really wish I had room for Mr. Peanut. 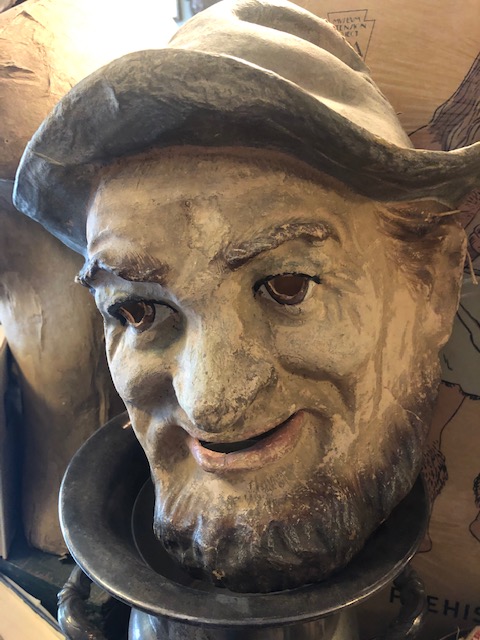 On our recent visit Kim purchased this little bank and a lovely little cabinet for me (future post) as an anniversary gift. I am just charmed by it and I immediately imagined stuffing it full of change as a child – and then being faced with the quandary of retrieving the coins as there seems to be no obvious option for cashing in. There is a seam running down it, and in the case of mine there is a crack near it which makes me wonder if someone didn’t break it in an attempt to open it at the seam. I suppose the purpose of piggy banks was saving, but I have never approved of the idea that you should have to break your beloved piggy bank in order to eventually realize your savings. It seems cruel.

My own experience with piggy banks starts with a nice pig model decorated with painted pink roses. The one below is not the one I had, but puts me reasonably in mind of it. 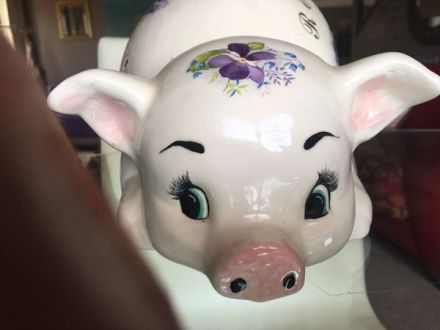 I also had a Snoopy one that, given the evidence and availability on the internet of the model I called mine, every child of my generation must have owned at one time. My memory was that it was actually a bit fragile and made of some paper mache material so I did not keep change in it. It was beloved though and I owned it for a very long time. I don’t think I kept money in the pig either – although both had rubber handy plugs in the bottom for releasing the change. No smashing my pig!

As it happens I instead kept my savings in a small safe made for that purpose. It had a combination lock (with the combination written on a tag the bottom as I remember, defeating the purpose but preventing the obvious problem) and it held a lot of coins, and then it weighed a ton. My sister and I each had one, and although I kept mine for more than a decade I could not tell you what happened to it ultimately. Somehow it and the change in it were lost to the sands of time. The one below, available on Etsy, is pretty much spot on the one I owned. It is a kick to see it again.

Meanwhile, Pittsburgh Paint was a small Pennsylvania paint company which was acquired by a glass corporation back in 1900. Therefore the slogan smooth as glass and the glass bank premium make total sense and a slogan still associated with them today. (On the reverse side of the bank it also states, Nature’s Colors in Lasting Beauty, a poetic thought.) The paint brand is still very available and the company has become one of the world’s largest corporations, PPG. I am not in a position to comment on quality of their paint except to say that my own kitchen was recently painted with Benjamin Moore and in all fairness, I had not considered Pittsburgh.

The prevalence of contemporary piggy banks found during my online search makes me assume that children are still given them with the intention of instilling a sense of thrift and savings. In a world where, according to Google, the average price of a Hershey bar is $1.60 and a comic book almost $3, kids either need larger piggy banks or to replenish them quickly. I know nothing of the economy of childhood today, but assume it involves as more folding money than coins. In a sense this is too bad as coins were nice objects to collect and own, although folding money seemed downright exotic when I was a kid.