Pam’s Pictorama Post: Last night Kim and I made a trip off the island (Manhattan island that is) to attend the wedding celebration of a much beloved colleague of mine, Morgan Bakerman, to her splendid significant other, Ben Brown. The elegant and jubilant party was held at the Prospect Park Boathouse. The Boathouse turns out to be quite near the park Zoo, which Kim and I had just explored a few weeks ago on a mission to research it for a possible story idea, however we had not made it down and around the correct corner to see it on that trip. Therefore, we were not aware of the truly extraordinary, ancient and magnificent (and famous) Camperdown Elm that graces the entrance.

This behemoth was evidently planted back in 1872, a gift to the park from a Mr. A. Burgess, a florist from Brooklyn. The Camperdown Elm was discovered in Scotland less than 30 years before our Brooklyn tree was planted. It was discovered by the Earl of Camperdown who then reproduced it through cuttings. (This tree is only reproduced through grafting – it does not reproduce by seed.) The Brooklyn Elm was celebrated in the poem by Pulitzer Prize winning poet, Marianne Moore, written in 1967 and published in The New Yorker. The publication of The Camperdown Elm was said to have rescued the tree at a time when a financial commitment was needed and the park was also in both disrepair and financial straits. The tree whose innate, quirky persistent desire to grow horizontally – like a giant bonsai of its own making – requires propping in places as gravity fights back, especially in one so old and clearly needs a certain amount of care and attention to survive.

This trip to Prospect Park reminded me that Olmsted and Vaux were playing their A game when they designed it – applying lessons learned from their initial foray designing Central Park. It is interesting to see their sensibility applied to this slightly different endeavor – the trademark arches in place, decorative tiles brightening interiors. The park is cared for by a conservancy group, but not with the precision of Central Park and this gives the visitor a different feel. Slightly overgrown, although also remarkably well-preserved in places. Below are some photos from last night – including a bonus photo of us! 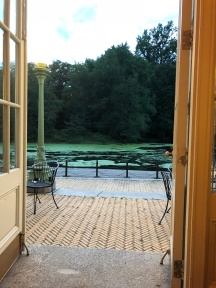 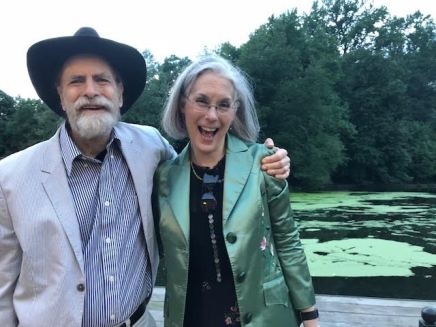 Images from the Boathouse, including a bonus one of me and Kim!

As some of you might know, I worked for the Central Park Conservancy for two years and had an extraordinary opportunity to get to know that park very well. I acquired small amounts of knowledge about trees and plants – I do not have a great memory for those kinds of names and information. However, the Camperdown always fascinated me. Back in 2000 when I worked for the park, the Camperdown Elm near the East 72nd Street playground was still a very small young tree and I loved the quirky, downturned “weeping” branches.

I was told that if you plant a Camperdown Elm you were making a commitment to future generations – they are very slow growing, but can be extremely long-lived. You are unlikely to live to see it to true maturity. (This is of course true of all trees to some greater or lesser degree, but the extremity of this commitment is illustrated by our Brooklyn Camperdown example.) The Central Park one, shown below perhaps a bit larger than it was when I worked there, was a favorite of mine. Sadly Camperdown Elms are vulnerable to the dreaded Dutch Elm disease that has run rampant through the United States, killing generations of these beautiful and much loved trees before their time. So a close eye was kept on this little Camperdown, and it has responded to its care  and nurturing by growing into early maturity. I still route myself past it occasionally, making the long walk to work in Columbus Circle from Yorkville, still taking an ongoing somewhat maternal interest in it.