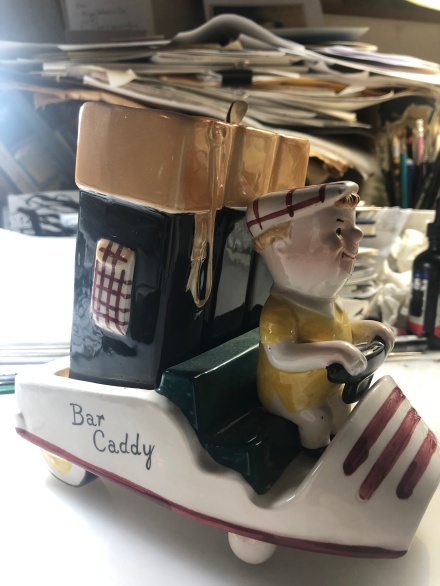 Pam’s Pictorama Post: Today I dust off an item I have owned for so many decades that I do not remember exactly how or where I acquired it. However, given the time period I came into possession of him I would guess I found him at a street fair.

In the late 1980’s and early 90’s Manhattan had street fairs, spring through fall, almost every weekend and all over the city. Unlike what they became later, in those early years there were a lot more tables of mom and pop types set up selling old stuff, semi-flea market style. (Meanwhile the beloved flea markets were being chased from their real estate so that new, towering condos could be constructed.) I followed them religiously around the city, taking in each new neighborhood along the way as I was fairly new to the city still, and purchasing odd items.

The street fairs were eventually taken over by corporate entities and the small time sellers pushed out and with that I stopped going. These days I would guess they will continue to be paused entirely during our coming pandemic colored summer and fall and who knows if they will come back and in what form. However, as I pointed out in yesterday’s post, all of Manhattan is developing a sort of a free for all, al fresco attitude with street vendors selling food and every establishment with a liquor license selling wine, beer, sangria (think diners trying to make that extra dollar) and mixed cocktails for consumption on the street. Protesters close down streets with marches daily, but the city has comparatively few cars in it, at least in my part of town. I realized recently I haven’t seen a yellow cab in months.

I believe this china, smiling, cart-driving, solid citizen was purchased in a nod to my then boyfriend, Kevin, who always had a nicely decorated, very 1950’s style bar in his tiny apartment on I think it was 10th between Avenues B and C. He was my street fair partner in crime and his taste in bar tchotchkes and decor definitely had an influence on me and my collecting in those days.

We drank as well and would explore interesting old New York lairs on the weekends. In that way we explored all of the still extant Yorkville bars, some almost private clubs like Elsie Renee’s Oke Doke Bar, where the elderly owner studied each person via a small window in a wooden door before deciding if safe to allow them into the charming, if barren, bar – not much decoration here; some dusty liquor bottles and plastic flowers as I remember. Her apartment was behind it through a small outdoor courtyard you could see from the bar if it wasn’t dark. Elsie was a stout, gray-haired, no nonsense kind of German matron. I think she served more or less two kinds of (German only) beer. I believe I drank Dinkelacker and Kevin maybe Spaten. A second woman of a similar age helped her and I would see her in the neighborhood, a bright kerchief over her hair, shopping in the remaining German markets of the neighborhood.

Then there was another tiny hole in the wall one called The Toy Bar in the East 70’s, around 77th and Second I want to say. It was ablaze in twinkling Christmas lights and was heavily decorated in toys that were from the 60’s and 70’s, that decade or two largely dating them to my own childhood. They weren’t great toys as such (I was just at the very dawn of toy collecting interest), but the overall effect was splendid and it was a friendly bar. Sadly it drifted out of existence fairly quickly. I often thought if I had lived a bit closer I would have frequented it more.

There were others – a strange subterranean piano bar in full 50’s regalia attached to a restaurant in the East 50’s; another neighborhood piano bar further east; the Top of the Tower Bar perched atop of the Beekman Towers on First Avenue on Mitchell Place (where First Avenue meets Sutton Place) with the most splendid views up and downtown and of the enormous Coca Cola sign across the river. I think we knew that we had a finite amount of time to experience all of these and took advantage of it, to the extent that our limited resources allowed. 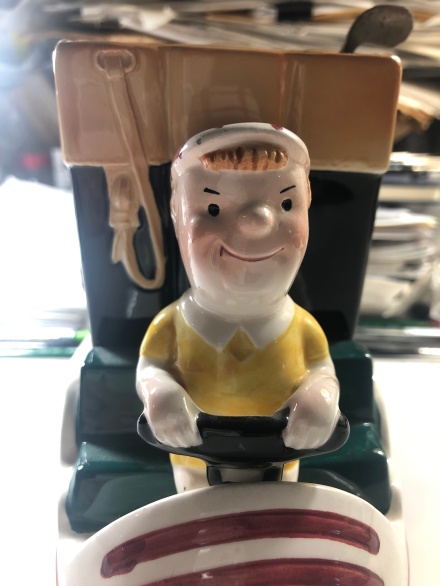 My Bar Caddy would have fit right in at most of these places I think. I find his smile just a tad smirky – the tiniest slip of the brush contributing to that. There is strangely detailed straps and bits hanging off of his cart and bags which being golf ignorant I know nothing of – but I am impressed by the detail nonetheless. (My eye-hand coordination, or lack of, made me such a remarkable failure at golf that I never tried after that first time in gym class, although I sort of admire tell of its Zen qualities. I have a golfing branch of my family however, on my mother’s side, and my great-aunt once won a car at a tournament with a hole-in-one. Notably, she made a second hole-in-one at the same club a few years later. Her granddaughter, a successful eye surgeon, was also splendid at the game and still plays.) 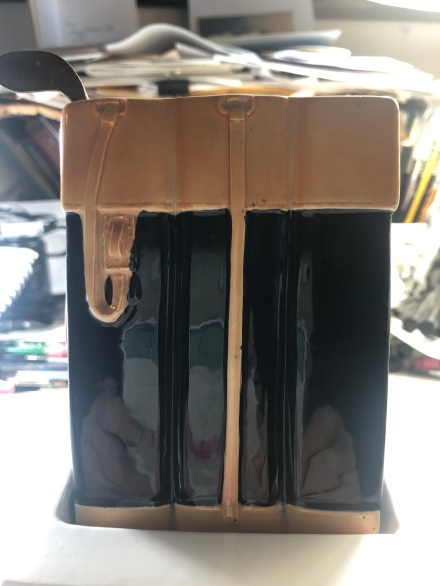 Finally, tucked into the back of this chipper fellow is a single drink stirrer. In the shape of a golf club (a putter? Kim who did a stint as a caddy says yes.), it has lived, appropriately, in the back of the caddy as long as I can remember. However, it is my memory that it was purchased separately. It is evidently from the Highland Hotel, in Springfield, Massachusetts and on the reverse side it declares, Every Meal a Pleasant Memory. In parting I share a postcard of the Highland Hotel and their menu below. More meals and drinks gone by although in another time and place. 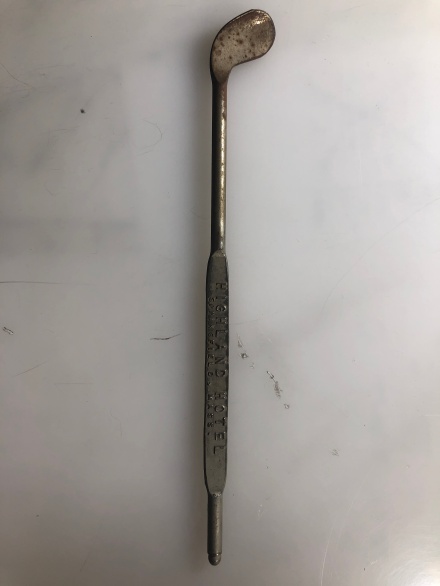 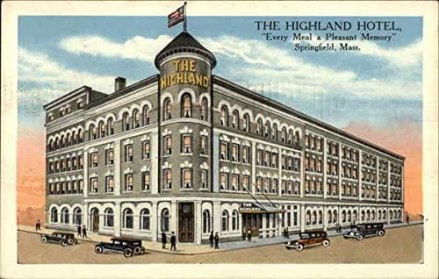 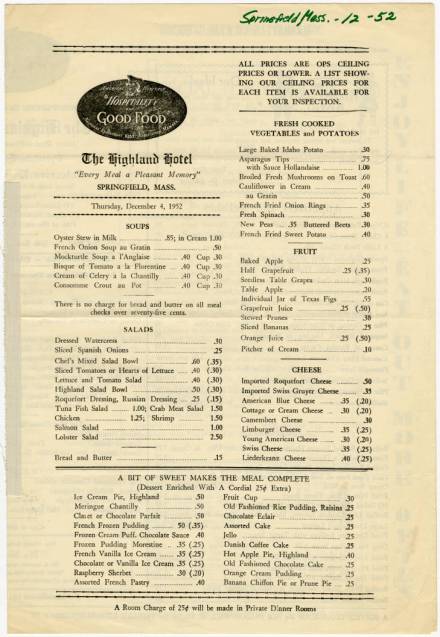