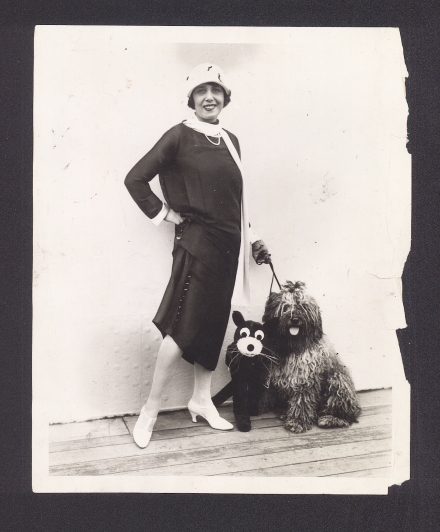 Pam’s Pictorama Photo Post:  Shown here is a recent acquisition. A press photo of a French stage star posing with her dog – and Felix! Plenty of evidence that, in addition to regular folks, stars enjoyed posing with Felix to help burnish their public image. (My Felix Makes the Picture Better illustrates this point, and look for several of actress Lilian Harvey that will be future posts.)

This one is undated which is unusual for a press photo. Glued to the back is a scrap of paper that reads, MISTINGUETT, the French musical comedy star, concluding her appearance here in ‘Innocent Eyes,’ sailed yesterday with her ‘million dollar legs’ for home abroad the Paris. She was accompanied by her dog, Alfred! And his stuffed playmate, Felix. staff Photo-Steffen

Okay, more about Mistinguett in a moment – but the Felix belonged to her dog? As a toy collector I am, needless to say, a bit horrified. We will assume that, if true, those particular toys are unlikely to show up on eBay today – although an interesting story for someone who finds one with little dog-toothy tears. How often did the Felix-es need replacing I wonder – Felix is almost as big as Alfred. I take comfort in the fact that I deeply suspect that it was a put up job for the photograph and that the pristine Felix toy went on his way with the photographer awaiting his turn with Dolores Costello and others.

There is a huge amount of information about Mistinguett on the internet. Born on April 5, 1875 as Jeanne Bourgeois she evidently decided to be an entertainer at an early age. She took the stage name Mistinguett and became the toast of Paris – the highest paid entertainer of her day. Her actual skill as a singer seems to be questionable, but clearly she had something and was quite the ‘It Girl’ of her time. The lover of Maurice Chevalier and King Alfonso XIII of Spain, she was a famous dancer of the Apache – one of France’s contributions to socially acceptable S&M entertainment. The IMDb database claims that her legs were insured for a mere 50,000 francs – but let’s not quibble. Her long filmography starts in 1908, but with only one film in the sound era, the 1936 Rigolboche, which appears to be available. One review sites her as a bit long in the tooth for the part – understandable since she was 61 at that point. (In all fairness, there’s a leggy photo of her when she was 50 that is pretty hotsy-totsy. It can be viewed, with much additional information on her at www.yodaslair.com/dumboozle/mist/mistdex.html) There are several fuzzy dupey clips of her singing on Youtube and I have spared you any of these.

Innocent Eyes, the show mentioned on the photo, was mounted to feature her and introduce her to American audiences and was pretty soundly panned. She never clicked here. Mistinguett seemed unperturbed however and I snatch a quote from the above mentioned website, In her autobiography, Mistinguett recalls the results of her efforts to learn English for this engagement:  My pronunciation was a great success.  ‘Innocent Eyes’ on my tongue became ‘Innocent Asses.’ I was begged not to improve on it. She was, as my grandmother used to say, a real piece of work.

And I can only guess that she was perhaps less than entertained with the idea of posing with the American film super star, Felix. Perhaps that is how she came to demote him to the role of dog toy!

Are those cat ears? An early poster image borrowed from the Google photo file.

2 thoughts on “Mistinguett – Felix Goes to the Dogs”