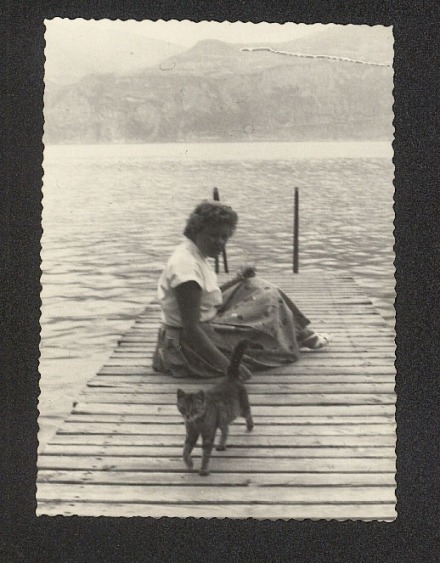 Pam’s Pictorama Photo Post: Continuing on in a theme of summers gone by, here is another offering. Unlike my post Alice Smalley this one is undated and without an label. It is not a photo postcard either – instead a small photo on the thick paper stock of the 40’s and 50’s with the rough, decorative edges that photos sometimes had in those days. This one of a woman and another fine tabby, a bit older but clearly just as scrappy. The woman here is a bit dressed up (that’s quite a skirt with polka dots no less – one doesn’t see polka dots as often as you once did – why is that?) perched here with sandals which I can tell you, probably weren’t that steady on that dock. It is another beautiful mountain spot. My only complaint is that this one is a bit dark.

This photo has special appeal for me because I grew up with a dock much like this at the end of our property. We moored a small sailboat off it and generally had a rowboat tied up next to the dock for the purpose of getting to the sailboat. The rowboat required bailing after each rain and that was a job that fell to my sister Loren and I for the most part. I admit that Loren was a bit better about it than me – and there is the time that she quietly untied the row boat while I was bailing – leaving me without oars and drifting off! Needless to say I was madder than a wet cat when I got a hold of her.

It probably is not surprising that the dock was a never-ending source of fascination, especially during long summer days. There were crab traps hung from it, but we would use nets to grab up crabs and fish too. Mostly we enjoyed low tide which allowed a closer examination of the bottom of the inlet of the river we lived on – named Polly’s Pond, although not really a pond in any technical sense. It’s historic name was Oyster Bay – no oysters there when I was growing up, but recently I understand that they have had success in seeding those beds and reintroducing them. For me, it will remain a mystical place of crabs and fish and long days laying out and getting tan, shared with my sister and brother and a number of curious kitties, always attracted to the possibility of excitement in the form of fish and rodents, perhaps a bit of protein hunted on the fly.