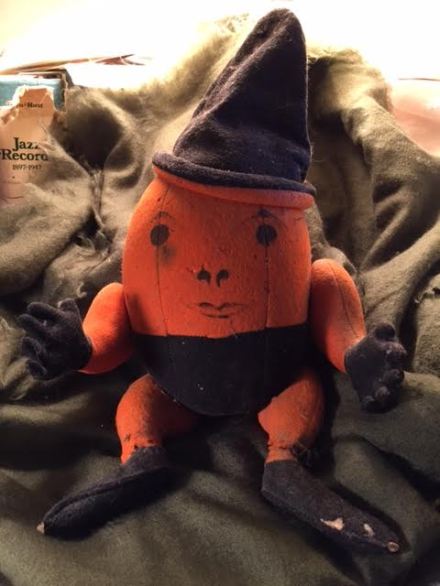 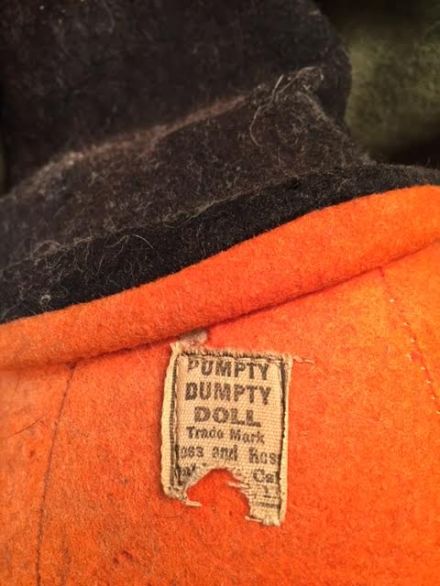 Pam’s Pictorama Toy Post: I purchased this fellow at an antique store in Seattle years ago while we were paying a visit to Fantagraphics. I guess I assumed he was a Humpty Dumpty even before finding the three quarters of an old tag at the back of him identifying him as such and also what appears to be Ross and Ross. I think it is safe to say that he is, by all measures, a bit creepy. I was only able to find one other image for a Ross and Ross Humpty Dumpty doll online and I show him below. (I could not find much on the company although it may have ultimately become a contemporary company just called Ross Toys.) The one below is equally (if not more) terrifying and I think fair to assume they are kissin’ cousins. Yikes! 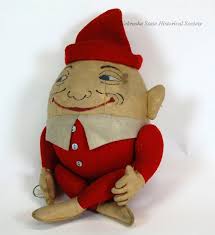 Another Ross and Ross Humpty Dumpty, not in my collection

It is clear mine is a nicely made toy – a wooly sort of felt. His arms and legs are fully articulated for movement, although fragile now. I always vaguely wondered if he didn’t have some sort of Princeton association – black and orange and all, like a reunion gift. I may have even bought him thinking I might give him to my sister. My fellow is a bit more primitive than the fellow in red I would say and his wool picks up all sorts of dirt and bits. His feet and hands were already well nibbled by moth when I bought him. I have done my best to clean him up for a photo – short of taking out the vacuum with attachment, he seemed too fragile even with the attachment. The nursery rhyme sort of bugged me as a kid and really I am not sure what made me buy him except he was so odd, early and well made. I know I didn’t pay much for him, a bit of an impulse purchase of the kind I am most likely to make while traveling. (I hate to regret not buying something in a city far away.)

I also found this Humpty Dumpty below on Pinterest for further comparison – I do not think he is the same maker, the definition of the hands and feet isn’t the same, but definitely more of the genre at the least. What is the SC for I wonder? 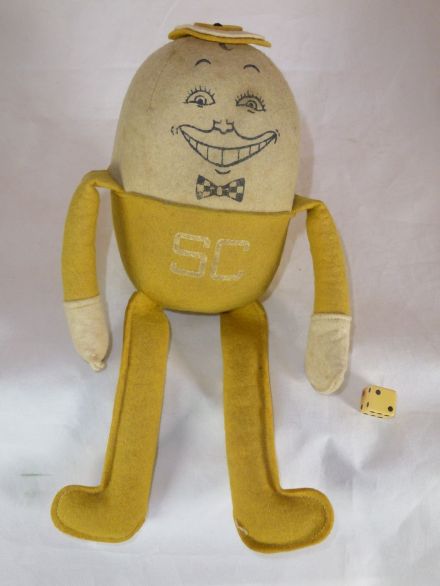 So one has to wonder why people were buying these sort of terrifying toys. I mean, who gives this to your kid unless you want to give him or her nightmares? I checked out Humpty Dumpty’s history and discovered two main points – it was never made clear that he was an egg (there is some speculation that perhaps it was a sort of a riddle originally) and also that there were a lot of earlier versions of the rhyme. It was first printed in 1810 and much to my surprise became famous through Alice Through the Looking Glass where he is shown as a creepy egg man – not unlike these here. My favorite variation on the nursery rhyme we grew up with is:

Humpty Dumpty sate [sic] on a wall,
Humpti Dumpti [sic] had a great fall;
Threescore men and threescore more,
Cannot place Humpty dumpty as he was before.

Below I am including this sort of great sheet music I pulled off of Wikipedia. Otherwise, our Humpty will go back on his shelf where he will continue to keep an eye on us, as he has over the last decade or so. 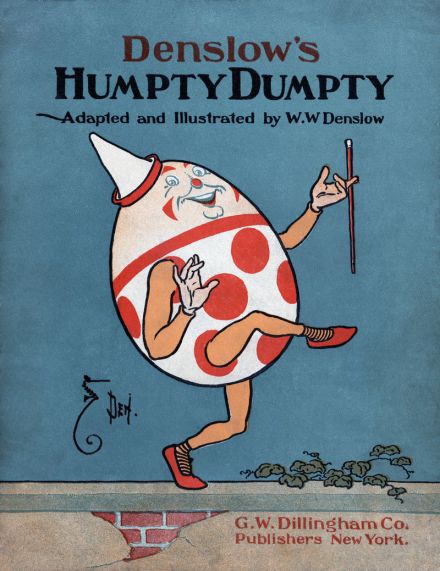 One thought on “Humpty Dumpty”