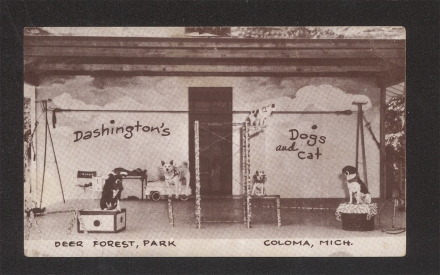 Pam’s Pictorama Photo Post: This card is unused and has no writing on the back. A quick Google search tells me that until 2015 one could visit some incarnation of Deer Forest Park, which appears to have been a roadside family-run attraction with kiddy rides and petting zoo. I could not find a date of origin for the park, although an article about the demise of the park and advertising the auction of the then remaining property – most of the rides were sold at the time of that article, including a train that must have run through the park which many people speak lovingly of – referred to its heyday as the 1940’s. I would say that Dashington’s seems to belong to that era, if not earlier. At the time of the sale, June of 2015, the animals had all been purchased by an animal group which raised the money in a GoFundMe campaign so they would not be auctioned or euthanized. They were looking for homes for animals including: horses, a pony, a tree frog in a tank, a 15-foot python, a 5-foot iguana, one emu, peacocks, 12 chickens, three wild Mongolian Asses, a British Labrador dog and a cat. (Evidently the Mongolian Asses were especially hard to place as they chew through all fence board.)

Of course my card belongs to the time when such small parks and attractions made up the bread and butter memories of many summer tripping families for decades, as the family vacation by car became the preferred post-war pastime. The fact that it is black and white makes me think it is perhaps a bit earlier – all of the other images I found online were in color. 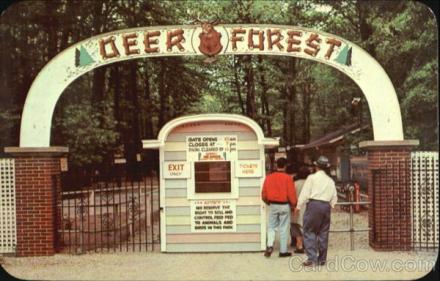 Early postcard, not in my collection

I doubt that the remaining cat and dog which needed homes were descendants of my crew here, although you never know. You will note the sign on the wall only promises Dogs and Cat. It took me a long time looking at this photo to find that single cat – up on the highest platform, white with dark cow-spots and wearing a harness. It is impossible to see for sure, but I can almost detect what I call piss-cat ears of annoyance on the fellow. The fact is, we all know cats don’t train especially well and do not appear to enjoy it. While dogs seem to like the interaction and having a job, with cats at best it seems to be a treat filled system which involves an uncomfortable level of coercion. (You may remember a post that provides an even earlier glimpse into the world of trained kitties, Mad Jenny.) Still, in my imagination somehow I persist in seeing glorious Busby Berkley type cat performances – glittering collars and dozens or more happily dancing kitties – with me as the mistress of ceremony, wearing my circus-girl costume, right in the middle of it all.