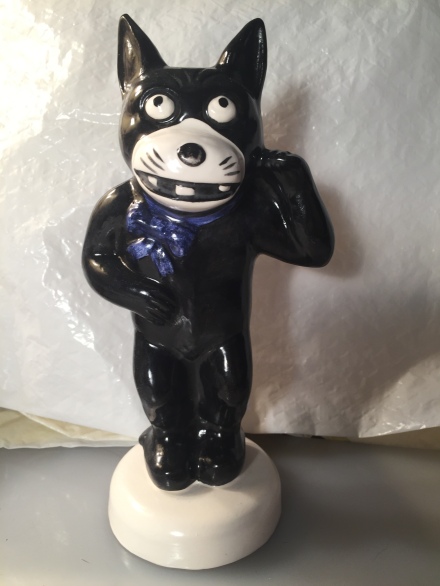 Pam’s Pictorama Post: This Felix came up on a Milestone auction and I put a bid on it, and numerous other things, and essentially forgot about it while I got absolutely creamed on a Aesop’s Fable doll that I thought I had in the bag. I am generally pretty philosophical about auctions and you have to be because, much like the rest of life, you are going to win some and lose others. However, as Facebook friends of Kim’s and Pictorama readers may already know, sometimes I howl like a scalded cat about a particularly painful loss. (Or even win – there was the Felix ukulele that I won on eBay and then the seller refused to sell it to me.) Meanwhile, I had completely forgotten that I tossed a bid onto this fellow in the same auction when I received a notice that I won him.

I never buy pieces like this because we have little space for them and they are too fragile to survive easily in the general melee that I think of when I consider our one-room, office to Kim and home to us and the two cats. Stuffed animals survive better than china and while I do make exceptions (such as the plates in my post Living the Felix Life, and the occasionally family heirloom such as featured in Ann’s Glass) even celluloid toys give me the willies, as mentioned in Fear of Celluloid. Still, I like this little fellow and I was pleased to have him show up right before Christmas which made him a gift to myself. He has the early Felix features that are pointy and just a tiny bit crude – toothy and like he might just take a bite out of you. He has found purchase (and hopefully safe haven) on a book shelf near the above mentioned family heirloom.

I show his back below and his markings. Other than Made in England I cannot make out the rest. Please let me know if any of you smart folks out there know more. The listing for him said he may have had restoration, but frankly if he did they did a superb job. I cannot find any. He appears to be seamed along the back which must have something to do with the mold he was cast from.

Felix back and bottom. Pams-Pictorama.com collection.

Evidently I come by my ferocious love of auctions genetically. My father’s mother (Grandma Butler to me, Gertie to others) was an auction addict and I often reflect that she would have adored eBay as much as I do if had she lived long enough to see it. Instead, auctions in her day were the kind where you went and sat in dusty rooms and bid in person. In that way, she accumulated large ornate furniture – carved and inlaid cabinets and desks, ornate lamps and side tables, mirrors and outsized Persian carpets (those having once graced hotel lobbies if I understand correctly) all of which I grew up with first in her house and then in our own after her death. This furniture was in stark contrast to my own parent’s taste which ran to the simplicity of early American furniture, but somehow we mashed it all together into coherence.

I could have learned to love visiting auctions and the excitement of bidding in person I am sure. My options of what I collected would have been considerably different however, since virtually all I buy comes from far flung countries, or at least far and wide across this one. Felix items and photos in particular seem to have flourished primarily in Great Britain and Australia as far as I can tell. Additionally I have the convenience of bidding on auctions at all hours of the day and night, often clad in my pj’s. (Full disclosure, I am wearing them now as I write this.) Given my work schedule it does allow me to do more auction perusing than visits to auction houses could possibly allow.

Nonetheless, I am sure that like all things, something was lost – perhaps the other bidders who you get know in a casual way or only by sight, or perhaps the tactile advantage of being able to examine and handle something in person before bidding. Knowing my grandmother she attended those auctions dressed in a brocade suit (she favored pattern and color) make-up done, red lipstick and hair piled high – bright with jewelry both real and costume – she loved both. I will never know the day in and day out of that experience, but I do know that the Butler clan is an auction loving one and this addition to the Pictorama collection is further evidence of it.