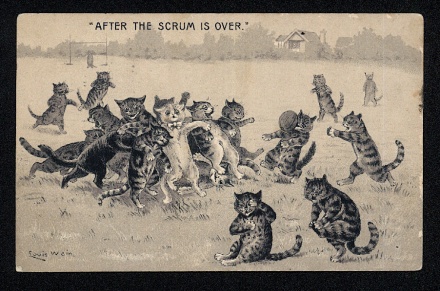 Pam’s Pictorama Post: Pictorama regulars know that I promised more Louis Wain and today is our next, although definitely not final, installment. Ah yes, as I curate the cat museum in my mind’s eye I now acknowledge that Louis Wain should take his rightful place, a collecting tributary of its own! This card is an image that I have favored from the time I started looking at Wain seriously. In some ways he is at the height of his powers here for me, making black and white work for him as well as color does.

Each and every one of these rugby playing pusses has this own expression of glee, pain, and even, my favorite, maniacal anger. Notice the one very happy cat who has his foot right in the eye of another on the ground – who in turn looks surprisingly pleased about this arrangement. The movement of these cats is great, but so is the sense of deep space with the lightly drawn house (rather British-suburban) and trees in the background. In the middle ground we have one cat covering the distance and the goalie, way back there.

This card was used and sent on January 11, 1905 from Freston. It is hard to read the address, but it appears to be something along the lines of: Miss Breaf Elle, East View, Bouds, Lancashire. The note reads, Moody Maureens next week are you & Kali coming? Let me know in good time as there is some one who will go with you. Evidently the sender assumed all would know who she was as she did not sign her name. (Handwriting and message makes me lean toward this being a woman.)

While this card is entitled After the Scrum is Over to me the scrum still seems very much in action. I guess the ball is technically back in motion so I won’t claim to understand the finer points of the game here. (Readers may remember I have a soft spot for rugby too since my sister played in college. Her trophies are considered in my post Trophies and also in The Crimson.) It is a ribald cat universe here and somehow Wain manages to capture the insane and slightly vicious, wild world that our cats would establish if someday they were indeed to take the evolutionary step toward being slightly more human. Quite a thought to contemplate fellow cat lovers!