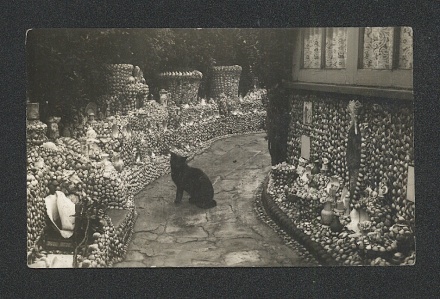 Pam’s Pictorama Photo Post: This postcard comes from Great Britain, but the location is unidentified. It was never sent and there is nothing written on it. I am on the fence about whether this was a mass produced postcard or something small scale, even singular. (Kim speculates even printed; we aren’t sure.) This shell garden may have been something of a local tourist destination, and perhaps they produced these cards – or maybe a lucky one off.

When I look at something like this garden I wonder how it all started. Was there a basket of shells, an abundant collection, which inspired someone to start affixing them, perhaps to a planter at first? Plunk a few on every Sunday until this is what the yard looks like? Or was the whole thing envisioned of a piece? While I suspect that the first is the most likely, I prefer to think that someone had a grand vision, started collecting shells and got to it. A living seashell mosaic. The kitty looks to be a lovely fellow and the seashells have a luminous quality. This card sends me day dreaming into thoughts of being tucked away in this garden.

Of course the handsome black cat makes the photo for me, although it does suffer from being poorly lit – we don’t even see glowing eyes or whiskers. Historically the British seem take a kindly attitude toward black cats, although admittedly I don’t know their feelings today. Therefore I do not think his or her presence was at all perceived of as unlucky – in fact they seem to take promote the idea that black cats are lucky. I have been reading a lot online lately about how people don’t adopt black cats because of the superstition. I think of the joys of living with our almost black kitty, aptly named Blackie, and I am stunned that someone might deprive themselves of living with such a great little guy. However, we did once have a cat sitter who wanted to see the white spot on his chest. She was sort of joking…and not.