Pam’s Pictorama Post: Fair warning that today’s post is a little bit of nothing that has been nagging at my brain lately, but for those of you who are willing to indulge me a bit, I am considering a an odd morphing of taste that has occurred over the last eight months or so. Now, don’t get me wrong, some of my preferences ebb and flow on a regular basis and a fondness for monochrome black clothing can easily give way to a mad desire for wild prints for example. However, I think of some patterns and desires to be as much a part of me as my brown eyes and it never occurred to me that they would change. I am thinking in particular of my consumption of coffee and tea.

The first significant shift in my coffee drinking predilection started quite awhile ago when I started drinking it cold in the morning. It started with not wanting to waste coffee after making it I would refrigerate it and heat it up. (I am a percolating coffee maker which I know puts me in the minority these days – I meet people in their twenties who don’t even know that percolating coffee pots on stoves exist. Kim is an instant coffee drinker and that preference remains truly mysterious to me.)

While I always drank coffee cold in hot weather, I also started drinking it cold before working out in the morning – and I loved this! Nothing like a fully caffeine charged workout with coffee consumed quickly on the way out the door into the pre-dawn morning. When traveling on business I would buy a cup of coffee and stick it in the fridge for my pre-workout the next day. (That was when hotels had refrigerators – when did they disappear? Am I the only person who had use for them?)

Eventually I began drinking my coffee cold every morning. (To be accurate, I will report that I also have a hot cup I picked up on my way to work every day as well.) As strange as this was, something much odder happened. Our food delivery company, Fresh Direct, sent us a container of cold brew. Since it was there I stuck it in the fridge and added it to my coffee one morning. As someone who values coffee first and foremost as a caffeine delivery system, there is no surprise at all that I quickly became addicted to the high octane combination brew.

What does surprise me however was when about five months ago I noticed a vanilla infused cold brew and decided to try it. Please understand, I have actually actively disliked vanilla coffee for years. It is safe to say there was a time when I would have considered it an abomination of sorts.  And yet, I had an undeniable yen and yes, I now add vanilla cold brew to my cold coffee each morning. I sit here drinking it as I write this morning. I keep wondering if it is a desire that will eventually just pass.

The other predilection which surprised me is an interest in tea which until recently I only consumed when sick – typically then with honey. However, I was on my way to see my folks in New Jersey one chilly morning and I saw a man with a covered paper cup of tea and it suddenly I was seized with the idea that a hot cup of tea with brown sugar would be just the thing. As it happened, I didn’t have time to indulge this desire and it was a few weeks later when I found myself home with a cold that I made some tea and dumped some brown sugar in. Now almost every afternoon these days find me indulging in this beverage which in my mind is still associated with childhood and I now find unbelievably comforting. 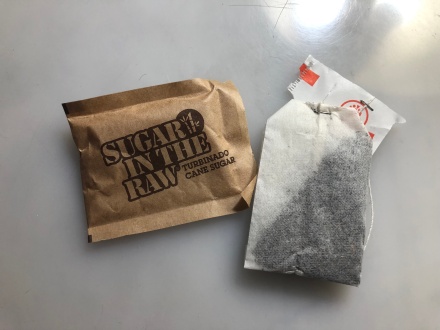 These two seismic shifts in routine have me stumped.

For those of you who are totting up how much caffeine I am consuming, you are right to raise an eyebrow. My cut off time each day is 3:00 if I don’t want to risk insomnia. Less surprising to me, I will admit that I am also unnaturally interested in the newly unveiled Vanilla Orange Coke Zero (sounds heavenly to me) at the moment and planned to snatch some up as soon as it arrives in my neck of the woods. In addition, I report that there is a bottle of Jack Daniels received as a parting gift at an event recently (along with a John Grisham novel which I am now reading) sitting in a bag by the television. I haven’t had Jack Daniels since college, but I am eyeing it and there may be a future preference post in those beverage choices as well.