A much younger Blackie during an earlier version of packing up the apartment for work to be done.

Pam’s Pictorama Post: Into everyone’s life eventually home renovation of one kind or another must come it seems. For better or worse I have kept it to the absolute bare minimum in my adult life time, but despite all efforts stuff gets old, worn, breaks and has to be replaced. I spent the first decade or so of my adult life in a rental apartment – renting might be the only way one can really avoid the need to do home repairs of substance, although I understand from my renting compatriots that renovations can be wished on you even in a rental when the landlord has a plan as well. (Sigh.) I renovated this apartment when I bought it and before I moved in, but now it is more years ago than I want to put in writing and the useful life of many things has come to an end.

Our upcoming home improvement is a combination of work that our co-op needs to do dovetailing in an unfortunate way with a renovation of our kitchen which is at least five years beyond when it should have been done. (Suffice it to say that I am afraid that if the Board of Health in New York City rated home kitchens like restaurants that we would be found sub-par and they would have closed us down.)

After my convalescence post-foot surgery about five years ago, I became aware that the kitchen needed a serious re-do. With a massive plaster cast on my foot I spent three weeks in bed, with it propped higher than my head, followed by another few weeks on a “knee wheelie” which was too large to negotiate our tiny, closet-sized kitchen. (A Great Dane could not fit in the space.) Recuperation ended up being about five weeks without seeing the kitchen at all. (Kim was top chef under my bedridden direction and of course there is take-out) and when I finally saw it again I realized the time had come and it needed some work. However, with some building mandated work coming out of the blue, then changing jobs soon and finally Dad’s illness, it didn’t happen. Suddenly years have passed and here we are and it is in a wretched state. 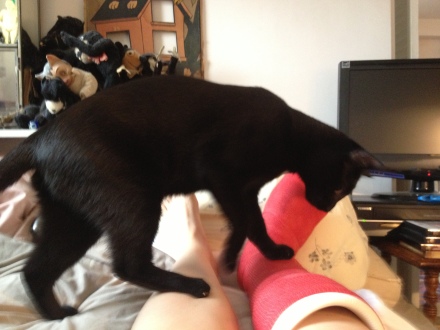 Blackie examines my foot cast while I recuperated from this surgery about five years ago.

I had hopes of executing the kitchen renovation over the summer, but alas, I had underestimated the difficulty of finding a contractor in NYC for my relatively puny job and instead spent the summer chasing those until I found Mike who seems to be a responsible citizen of the world. For my readers (I will assume most) who do not live in Manhattan co-ops all of this will seem strange and dreadful – which it is. In order to do more than change a light bulb (I am exaggerating but only slightly) in a New York co-op apartment you need to file paperwork – and more paperwork. Then you wait and they ask for a bit more paperwork – licenses, plans, spec sheets for stoves and the like. I understand they want to make sure you aren’t moving walls, ruining pipes or generally bringing the place down around our ears, but it gets a bit absurd.

While Mike and I are in the negotiating with the management agency stage paperwork stage of the project we are in a honeymoon phase of us-against-them. Hopefully we will remain a good team but let’s face it, that is like the difference between dating and marriage. Nonetheless, no complaints, at least he’s been willing to go steady with us.

Somehow, simultaneously, our building which has dawdled along on a project to replace all the windows (they too had planned for the summer) has scheduled this to happen at the same time. I don’t know if you reader are like me, but the idea that some day in the next few weeks someone will come and rip the windows out of our sixteenth floor apartment and tuck new ones in kind of freaks me out. I mean, inconvenience and packing up notwithstanding. There’s going to be a period (hours? minutes?) when our beloved single room home is just nakedly entirely exposed to the outside, sixteenth floor outside world? Yikes.

So we will wrap bookcases in plastic, pack antique toys away (it means everyone will get a good dusting at least) and cats too will have to be spirited into the locked bathroom or to the vet for the duration which we understand to be a day. I’m not sure if I will stay and huddle at my computer perch for the duration or abandon ship for the office after work has commenced. We do not have a firm date yet, but it hovers (menaces, lurks) immediately upon my return from South Africa, a week long trip which commences tomorrow as I write this.

Meanwhile, Kim and I are not strangers to work being done in this apartment. As I alluded to above, the building had a project of pipe replacement a few years back (yes, they re-piped the entire heating system – I guess pipes give out over time, who knew?) which required that a large swath of our ceiling and some of our floor be ripped out for what turned out to be several weeks of work. They encased the work area in plastic, with a little zipper to get in and out, but dust and plaster were everywhere and we remained shrouded in plastic for weeks – more or less living perched in bed and only Kim’s work table otherwise accessible.

Therefore today, in addition to packing for more than a week’s sojourn to Johannesburg with my beloved Jazz at Lincoln Center orchestra, I am assuming the hat of Director of Operations for Deitch Studio once again. I deeply suspect there will be more to say about this soon. 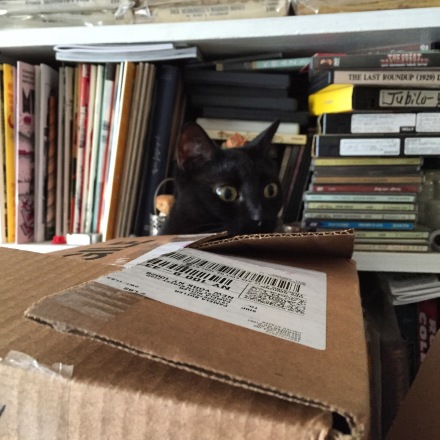 Blackie slightly horrified at packing during for the re-piping project.

Cookie having a grand time during the same packing project!