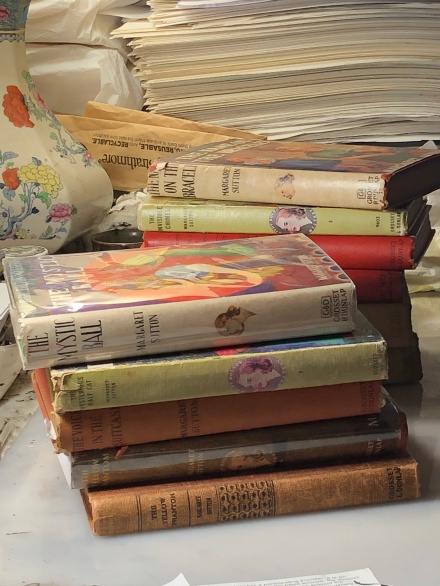 Pam’s Pictorama Post: Pictorama readers know that I have a very real soft spot for juvenile novel series and I detour today to begin a fairly long missive about girl detective, Judy Bolton. I have been reading these on and off for the last year or so. While I may tend toward the completist even in my following of favored authors (see my thoughts on Edna Ferber here and my numerous posts on Frances Hodgeson Burnett’s adult novels, which start here and here), I am a persnickety reader of series books, acquiring them and reading them in order. A missing title in one of these is a real fly in the ointment from my perspective. Just a warning before you really settle in, spoiler alert as I will probably end up giving away some of the series plot line.

I did a long stretch of reading and reviewing as I worked my into and through a number of other series. I never read any of them as a child. My sister Loren was the Nancy Drew reader in the family and I can remember admiring how nice they all looked lined up in a bookcase in her bedroom. Somehow they just really belonged to her though and I never read them, although I guess I could have with some wrangling. (The same is true for the Black Beauty books and the Tolkien novels. These were things I associated with her and territory I never entered.)

Among my favorite series discoveries are Honey Bunch (my review can be found here), Grace Harlowe, the Automobile Girls and especially The Moving Picture Girls novels. (A post devoted to those can be read here). I had put my series reading on the back burner and was focusing more on authors when Kim got a tip that I might like the Judy Bolton series and purchased one for me appropriately called The Mystery of the Half Cat.

I took to Judy Bolton like a duck to water and I have been weaving them into my reading since. As I write today, I am halfway through the 40 volumes in the series, although it should be noted that only 38 were written by the original author, Margaret Sutton. (Margaret Sutton, aka Rachel Beebe.) The books were largely published by Grosset & Dunlap. Unlike the Stratemeyer syndicate books, Margaret Sutton was a real person and wrote all of the novels in the series herself and this is evident in the writing. While these are still all based on formula (mystery introduced in the first quarter of the book, develops in the second, is positively puzzling obfuscation in the third and resolves in the last) Judy develops as a character over these many volumes. Wikipedia offers the interesting comment that it may have been pressure from Stratemeyer that killed the series rather than flagging sales in the interest of Nancy Drew, but nowhere can I find an explanation of how this played out amongst their commingled ownership and whatnot.

Judy Bolton as a character is interesting and a bit complex. She appears to age more slowly than the years it takes for these volumes to unfurl, the first twenty books span from 1932-1949 and Judy seems to start at her senior year in high school and then hovers in the year or so just after, time advancing slowly while she works in the newly opened law office of her sweetheart and eventual fiance, Peter Dobbs. (They marry in the 17th volume, The Rainbow Riddle. Marriage does not appear to diminish Judy any.) Her parents would have liked her to consider college, but she has decided that working with Peter and unpaid sleuthing is her destiny. She is an odd mix of a more modern woman and one of her late thirties, early forties decades.

What I like best, in some ways, about Judy Bolton is that she is actually quite unlikeable at times. She is stubborn and sometimes myopic and self-indulgent. Other characters routinely call her out on it, as they should. There is something very human and endearing about her gaffs however and she generally recognizes her mistakes, as most of us do, and makes them right.

Early on Peter gives Judy a black kitten she names Blackberry (he of the half cat above) and he routinely finds his way into most, but not all volumes. This of course endears the series to my black cat loving heart! Her brother Horace acquires a white cat who seems to disappear in later volumes, but he also acquires a rather rude bird who remains prominent. Horace shows up in most of the volumes, playing a bigger role in the early volumes.

Judy’s affections swing between Peter and the wealthiest boy in town, Arthur Farringdon-Pett. Most remarkably, Arthur owns an airplane – how could a girl resist that I guess. Judy and Arthur go so far as to get engaged in later volumes, until Judy realizes her heart really belongs to Peter.

It interests me more than a little that people actually die in this series. Criminals die, people die in car accidents, her grandparents eventually die over time. Meanwhile, a lot of children are being raised by somewhat random people or given to orphanages, and therefore there are several mysteries which resolve in people being related to otherwise unlikely people – long lost heretofore unknown siblings, cousins. Perhaps for someone writing in the post-Depression era this was somewhat less unlikely than it seems today. People found themselves impoverished and left babies for adoption or even just with other people.

The series opens with Judy forced to leave her hometown of Roulsville in favor of higher ground in nearby Farringdon, an imaginary exurb from which recognizable places in Connecticut and Manhattan can be reached within a day’s trip. There are farms, Judy’s grandparents have one in Dry Brook Hollow – a seemingly poorly named area as that is where the flood occurs in book one. It is theoretically based on the Pennsylvania area where Sutton grew up and returned to for the inspiration for her novels.

The stories build on each other and landmark events are retold which advertise earlier books, but also adds to the sense of the created, shared universe. Certain key events, like the flood in the first volume, are mentioned in virtually every volume – sometimes in more or sometimes less detail. Other stories waft in and out of the tale of the moment, depending on the relatedness of the current cast of characters and location. It is said that each book was started from a kernel of a real incident, such as the flood, which inspired Sutton.

Judy’s father is a doctor, but somehow they only hover at the line of middle class. Early on Judy expresses discomfort with the wealthier girls in school – understandably because they treat her poorly at first – but also equal insecurity about how to act around a neighbor who is poor and attends the local secretarial high school, leaving eventually to work in a factory. (I have to just take it on faith that secretarial high school was a thing – like technical schools of other kinds which have morphed more into college years than high school now.) Their town, Farringdon, has a strict dividing line between the “good” area of town and the “poor” area, although one thing that seems to be entirely absent are people of any ethnic group at all, no one is black, Jewish, or hispanic. I believe Gypsies are mentioned, but not in a good way. There are hoboes and all sorts of men who are only marginally employed. They are almost always threatening and have ties to the local underworld.

Oddly, these books are not available on Project Gutenberg or other online sources and therefore it has been necessary to purchase the books which I have generally found used on ebay, paying on average about $10 each with shipping. (The series has been reprinted in paperback, which might explain the extension of the copyright, but those tend to be more expensive than just purchasing the old volumes.) For the most part purchasing the old books has been fine; I think only one has fallen to pieces in my hands while reading it and only one other went astray for a period before showing up on 86th Street. A few have even sported dust jackets. (The books are nominally illustrated by Pelacie Doane and I will only offer that they are appropriately period drawings and covers.) 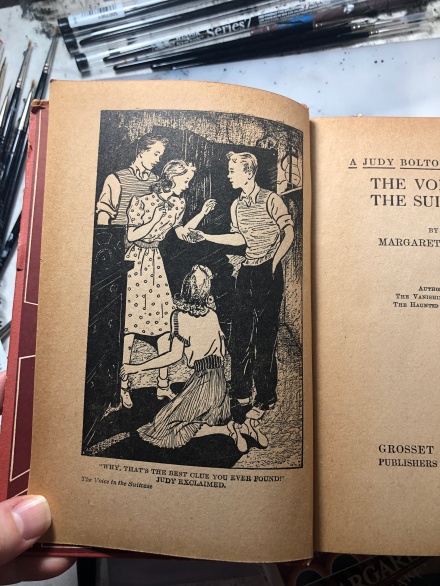 I can’t say I find the (limited) illustrations inspiring and sadly could find none featuring Blackberry.

I’m not sure what happens when I am done with these volumes – we hardly have shelf space to devote to 40 volumes although part of me loves the idea of the long line of matching volumes. I guess I will either resell them or give them away. Kim has expressed interest in reading a few so I will keep them around for awhile. Research online tells me that the later ones may get difficult to find and since I am generally a completest in most things I will be bereft if I can not read them all.

Sutton in one of her author photos.

October is the month when the annual Judy Bolton Weekend is held in Cloudersport, Pennsylvania. This four day fiesta celebrates all things Judy and Sutton. I am already working on enlisting Kim in that adventure later this year – although it is admittedly far and the travel route without a car is a bit unclear from New York City. In addition, there is a fan club run out of Mt. Carmel, PA which is devoted to Judy, Nancy, Trixie Belden and the like. All this to say, having already gone on for quite a spell, there is still indeed more likely to come.