Pam’s Pictorama Photo Post: Something about the composition of this photo, and the women in their wonderful hats, made me grab it. This was purchased, like many recent photographs, during what I think of as the lightening rounds of sales, mostly on Instagram. (I have written about these a bit recently, highlighting purchases from @missmollysantiques in a post here and here.)

Upon reflection I wonder if this is the sort of thrill my paternal grandmother got from her somewhat compulsive visiting of auctions. It is known to have been her hobby to haunt the Manhattan auction houses of her day, buying up gorgeous enormous Turkish carpets that originally were meant for hotels, heavily gold-leafed mirrors and formal furniture from an earlier time. Those items would eventually make their way to the house where I grew up, existing in a strange contrast with our otherwise casual life of kids, cats and beach.

While I don’t have the additional complexity of bidding and deciding the ceiling of what I will pay, there is just a short moment of viewing the image before claiming it. Some sales give advanced warning (I will be keeping an eye out for one by @wherethewillowsgrow later today) and others just appear without warning at odd times.

Today’s image comes from the buy I did from an online sale held by dealers who were missing the economic boost of the enormous, in-person, quarterly Brimfield flea market multi-day fiesta. The buying was (somewhat) less frenzied. This was the seller I purchased my glorious snapshot of Lucy the Elephant Hotel from and which can be found here. There was an additional shot of these ladies which included a truck (presumably a VIM), but it didn’t have as much charm and so I only purchased this one. I regret that a bit as I write that now.

I wonder if these could have been employees of VIM Motor Trucks. (If you look carefully, there’s a man and a boy to the back of the group.) VIM Motor Trucks, under that name, was only in business between 1915 and 1921. Based on the women’s clothing I would lean toward the earlier part of the run. Women were entering the realm of office work at about that time – it is pure speculation but possible.

VIM was a Philadelphia company which made the sort of small delivery trucks that would have been used by farmers, lumberyards and those having like hauling needs. It had a brief meteoric rise and then, with no explanation I could find, it largely dissolved and the company was sold to the Standard Steel Car Company which itself disappeared not many years later. Perhaps it was the very nature of commerce that was changing and the small business was already giving way to larger enterprises. That span of years is a fascinating one in our country’s history – the years leading up to 1918 when war and influenza catch up with a run that seem to have spawned endless creativity and inventiveness.

I share an ad for VIM and a photo of the badge that graced the trucks below. The ad seeks to illustrate the necessary difference between the brutal strength of the VIM truck, making it a better choice for a commercial vehicle – and unlike pleasure cars with their delicate electric starter and other effeminate fittings the sturdy VIM with its abnormal mechanical safety factors…The emblem shows their truck versus a horse drawn cart – the cart only covering a 5 mile radius to the truck’s 20. 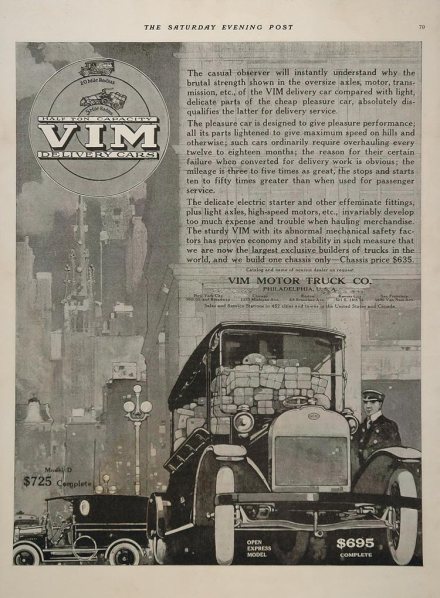 The VIM sign contributed to my decision to purchase this photo, as well as the friendly and nicely attired group in front of it. The women are fashionably, if practically, dressed for a photo on what appears to be a nice, sunny day. The woman closest to us (with the large hat) is looking away from the camera, probably at someone we cannot see. It’s a pretty spring day, VIM Motors is prosperous and the future rolls out ahead of them.