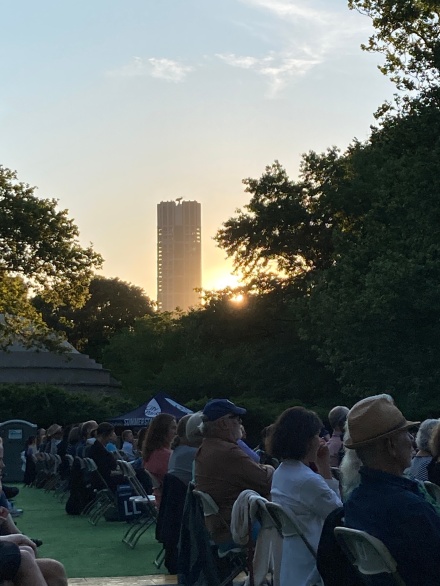 Pam’s Pictorama Post: My friend Eden gave me the tag line to this blog, All Pam, All the Time and I liked it because many of my readers, especially at first, found me through Kim and it seemed fair warning that, although you will get some Kim, Pictorama is a heaping serving of me. Some days are more me than others and this is one of those unabashedly me days.

In a quiet way, this week lurched forward significantly and was sort of a landmark week. To start, it was made public that Jazz at Lincoln Center was one of 286 recipients of extraordinary and unsolicited donations from MacKenzie Scott, the philanthropist ex-wife of Amazon titan, Jeff Bezos. (As one colleague said, I feel so much better about all the money I spent with Amazon over the pandemic.) It is a gift that will have a profound effect on the organization and as a career fundraiser it was a once in a lifetime gift to experience. Truly it is a testament to the hard work of Wynton Marsalis, especially his tireless work over the last year plus, as we struggled not only to survive but to be present for people who needed music and community during this time.

However, much like when Kim has a new book to promote, psychologically I had moved on once it was done (there is always more money to raise and we are still closing this year) which for me happened a few weeks ago, and I was drawn back into it with the public announcement, which lead to announcements to Board and staff.

The other events of this week included my first hair cut in a year. Although I had gone last summer, the timing and location are bad for me working from home. However, my newly broken fingers have required first Kim’s help and then my own awkward efforts to put it up and I realized it was time. (I wrote about my longstanding decision not to dye my premature – at first anyway – gray hair in a recent post here.) It was nice to catch up with David who co-owns the salon and has cut my hair since our wedding back in 2000.

Unlike last summer’s cut (short, short because I didn’t know when I would come back) somehow this one transformed me back to a semblance of my pre-pandemic self. The pounds I have dropped (still some left to go, but many gone) probably help in that regard and the recent purchase of a sundress which I was sporting contributed to the overall effect.

The timing was good because shortly after I headed over to Central Park where the Jazz at Lincoln Center Orchestra was opening Summer Stage. Many of my colleagues from across the organization had booked tickets and it became an impromptu reunion – complete with hugging and elbow bumps for those not ready to hug. (There’s a lot of hugging in jazz.) The outdoors meant everyone was pretty comfortable being without a mask, eating and drinking. I can’t say the year melted away, but it was like salve on a wound.

As the sun was setting in the west and the orchestra struck up the beginning of Rhapsody in Blue I looked around and realized that coincidence had it that I was seated with many folks I sit backstage with during countless concerts in the hall and elsewhere. I stretched out in my chair and watched the sparrows ready for the evening, a few bats. My eyes welled with the sheer pleasure. The weather and the night were perfection. It was the first time I felt like maybe we really are back.

Friday dawned with a trip to Dr. Mir (hand surgeon – my Memorial Day hand exploits can be found in a post here) and my first session of hand physical therapy was later in the afternoon. I admit to being squeamish about pain and I can’t say I was without some trepidation. My hand is healing, more or less on schedule it seems though. With a little luck I may be allowed to take the splint off at home in another week – maybe even be cleared to run and work out a bit by the end of the month.

Seeing my hand without the splint really for the first time was a bit discouraging. It remains black and blue (quite green actually) in the extreme, still swollen in places. Being allowed to wash it was a huge relief however and that made up for the discomfort of it making its debut, splintless for examination and therapy. There isn’t much to say except that therapy is slow and hurts – almost by definition. I am a chicken about pain frankly, but a realist so I am focusing hard on making each movement count as I remind my fingers that they know how to bend. How could they have forgotten in a few short weeks?

By the end of forty minutes with the therapist we could see some, small improvement. I was reminded that my original purpose in taking up running (at least in part) was to tackle something different and hard during a time when my waking hours seemed to be confined to a desk chair in our one room apartment, working. While hand therapy will not get me outside, nor help me lose weight, it is unintentionally providing me with a new challenge to meet.

So I end the week with some renewed optimism about our impending nascent return to the office part-time next month. I think I am starting to shake off my Covid cocoon and if not the old Pam, at least the latest model of her,