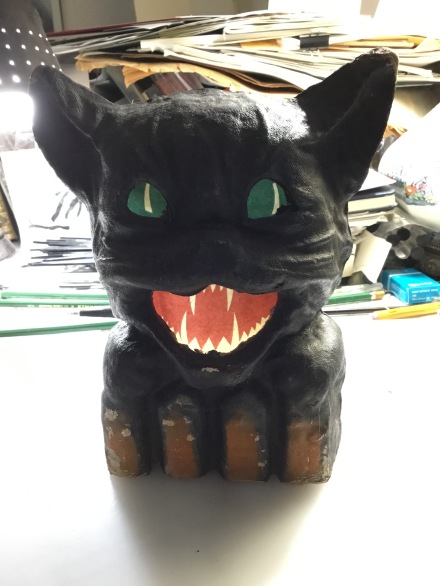 Pam’s Pictorama Post: The Halloween season is upon us and brief morning trips to run in the park have revealed some serious dedication to decorating for the holiday. I used to enjoy seeing the townhouses near the Met decorated for the season – some would really pull out all the stops and put on a show. I am less often over there now, but one townhouse near Carl Schurz Park is really throwing down the holiday gauntlet with this tableau of a chain of skeletons climbing down the front of the house from the attic!

The Mansion Diner, on the corner of 86th Street and York Avenue, has long dedicated themselves to decorating their entire building for the holiday. They were a little late getting them up this year and I wondered if, short handed, they would skip it, but the decorations appeared earlier this week.

It’s interesting that I only rarely had reason to frequent The Mansion pre-pandemic, but now it is a regular stop for breakfast sandwiches post run and frequent meetings with a Board member from work who lives around the corner. I spent the summer eating ice cream outside while talking with him about work, Frank Sinatra being piped out loudly for our listening pleasure.

But if part of your collecting gig is black cats this is a great time of year. I think I have mentioned that my collecting has blossomed thanks in part to an online dealer from the Midwest, Miss Molly (@missmollysantiques). My friendship (consumership?) started with purchasing a black cat jack-o-lantern head. (You can see that post here and the kitty below.) Overtime I have also purchased photos from her (the most recent of those can be found here). And she nicely gives me a heads up on cat items before posting them, but once in awhile it is the stuff around what she is posting that catches my eye and she sold me the wonderful Krak-R-Jak Biscuit box that sits on my desk. (That is a sort of oddly outrageously popular post that can be found here.) I have a rather spectacular Nestle chocolate tin box to share in a future post as well, but today we are talking Halloween.

The fact is my yen for these early paper mache cat JOL’s goes way back. I remember visiting a store in Cold Spring, New York that had a huge collection, but very expensive and utterly out of my reach. (Fall is a beautiful time to visit that area, an hour and a half or so up the Hudson, right on the water. It is a picture perfect little river town and Kim and I spent one night there for our “honeymoon” there, 21 years ago this past week.) I had resigned myself to never owning one, but the internet has become a great equalizer and prices are lower – and I spend more money!

All this to say, recently she came up with this cat jack-o-lantern and it entered my collection as my second such item. Like the first one I purchased, the paper inserts remain intact. It is hard for me to imagine safely putting a candle in these, but I guess that was the idea. There is no evidence of this on the inside, but there is a wire on the top for hanging it and that would have been jolly indeed.

He shows some signs of wear, especially the tips of the ears, which I guess if you were hitting the hundred year mark you would too. It is a common design and I assume it is a black cat sitting on a fence post, green eyes and red mouth glowing. His fur and whiskers are embossed. (The molds that these were made around must have been great – would love to see one of those.) He would be just the right combination of scary and wonderful. I get the vague idea that these are German in origin, although upon reflection, do the Germans even celebrate Halloween? It would seem that it is a recent development (according to Google), so perhaps these were German American companies? Anyone who knows how all that works give a shout and let me know.

Meanwhile, Halloween is the seasonal gateway to fall and then winter. I have already started eyeing warmer running togs and dreading those very cold mornings to come. Nonetheless, I think I probably have a few more Halloween collectible posts in me this season. More from Pictorama to come.