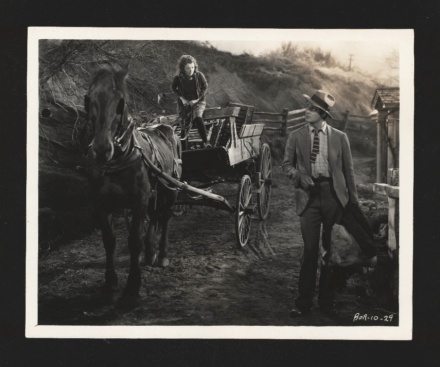 Pam’s Pictorama Photo Post: The purchase of this film still allows me to return to a favorite topic today, the films of Frank Borzage and in particular one of my favorites the 1929 film, Lucky Star. My original 2014 post can be found here, but as of writing now I can share a link for the entire film which can be found here. That post was inspired by the purchase of another Lucky Star still and one from another Borzage film, Back Pay. (For Borzage fans who may not know, a great restored version of Back Pay recently became available and as of writing it can be found here.)

This morning I was puzzling through my fondness for this film. Visually, the setting which is a wonderful mix of artificial and realistic and paints its own world is part of it. It is undeniably bleak, but there is something about the self-evidently constructed ponds, paths and buildings that seem to put my mind in a pleasing place. We know now that these sets at Fox were in use morning and night, a young Janet Gaynor was working day and night there on two films at one point and you wonder when she might have slept or ate a meal.

In this story an impoverished young woman is mentored by a war-damaged WWI soldier in a sort of Svengali-esque remake of her. Ultimately his love of her ultimately eliminates all obstacles; this is the sort of perfect Borzage pathos leading to a love conquers all ending. In my opinion Bozage is at his best when given this sort of material and clearly he had a pretty free hand over the making of it. He’d give you a glorious wrap up with a sad ending if he had to (I’m thinking of his A Farewell to Arms as one example; you need to find the unedited version if you are going to watch it – makes a lot more sense including his ending), but he was in his glory building to a happy ending against all adversity.

This photo is from early in the film, in the pre-War day to day world of the far reaches of a nowhere backwater. One of the through lines of this story is the way World War and ultimately change comes even to such a remote corner. Here Janet Gaynor is a wily and feral child to Charles Farrell’s relatively sophisticated adult. The lighting is dramatic and bright where it hits in high relief. The ribs of the poor elderly horse stand out and as does the fence. There’s something about Charles Farrell’s hat which is a tip off that the change he is going to undergo has begun.

I can cheerfully tell you that there are definitely other scenes from this film which, should I be lucky enough to find photos of, I would snatch up in a heartbeat. Should that come to pass I assume I will likely pass those onto Pictorama readers as well, understanding of course, that some of you may not share or understand my enthusiasm. However, the last part of the film takes place during a long scene in the snow and I would love to own some of those so I could lose myself daily in the wonderful silent film world of Frank Borzage and Lucky Star.