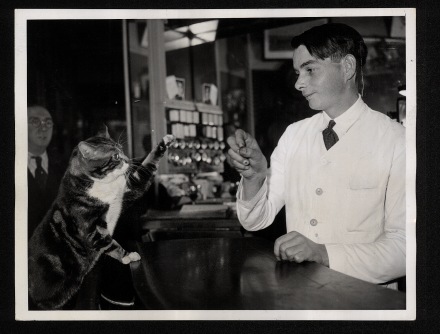 Pam’s Pictorama Photo Post: There are lazy times when I like nothing better than to take a long stroll through ancient press photos on eBay. As Pictorama readers know, I purchase the occasional one, but I also enjoy the trip along the way. Comic and human interest photo filler for newspapers appears to have been more prevalent and somewhat more freewheeling than today – although perhaps I am just reading the wrong papers now. Strangely these photos are generally dated with a month and a day and not a year, so we don’t know exactly where in the early part of the 20th Century this one falls, but we do know that it was set for publication from the Acme Roto Service for release Sunday, May 29 or Saturday, May 28, to papers not having a Sunday edition.

The caption was to read, ‘Big One for Me’ ‘What’ll you have, Fifi?’ asked a visitor at the bar who was buying drinks for the house. ‘Make mine a long, tall, cool one,’ answers Fifi, using his forepaws to show the bartender the size. I raise an eyebrow at Fifi being a he, but will have to let that slide I guess. Fifi, if indeed that is his name, has a great look of intensity and some annoyance in this photo. Clearly he was born decades too early and should have been doing cat videos on the internet during today’s generation of kitties. Most memorable for me are the patti-cake playing cats who do a slo-mo fight to a narration of patti-cake, but a quick search turns up numerous others. Cats are standing up and gesturing with their paws all over the world and we love recording it with gif’s and on youtube. (This of course leads to cat boxing, a subject previously covered in my post Powo! Cat Boxing and Cat Boxing, Round 2.)

Since I never had a cat do this before Cookie and Blackie, I assumed it was perhaps an evolutionary advancement in 21st century cats. However this photo is here to remind me that, once again nothing is new that isn’t also old as well. To my surprise both our cats do this spontaneously, but Cookie much more than Blackie. She especially likes to hop on a small rocking chair and let it rock gently (adds urgency perhaps?) and reach up with a star fish paw for your attention and bam, a little high five along with a chirp. Blackie much more likely to reach the occasional, languid paw up, almost more of a stroke, for your attention. (And that says all anyone needs to know about their personalities and the differences.) When the cats were tiny they would stand on their haunches in unison chattering, paws outstretched, when Kim would exercise with an old paint pole, back and forth over his head.

This barmen cat is a solid citizen so we will assume he was the recipient of many complimentary bits off the blue plate special of patrons at lunch time – or there was a plentiful rodent population at his disposal, my guess is both. This photo pre-dates the high five as we know it, and so our friend the bartender doesn’t quite know what to do in response and gestures unconvincingly. I do like the idea that Fifi is requesting a large, perhaps frothy drink. “No, I want it this high!”

This photo reminds me of a restaurant I used to frequent when I lived in London. It was in Holland Park and was sort of upscale so I didn’t go so very often. However, in the bar area there was always a rather amazing buffet of various foods including a beautiful plate of salmon trout. Same bright orange as salmon, but a much smaller fish that I only ever saw in Britain. (Turns out that it is of the rainbow trout family and is also, less attractively, known as steelhead.) Anyway, the beautiful and well mannered cat of that bar was always parked provocatively under the plate of salmon trout. I inquired and was told that kitty was very well-behaved and never helped him or her self, although was known to have a portion slipped to him now and again. So there he remained, ever hopeful. 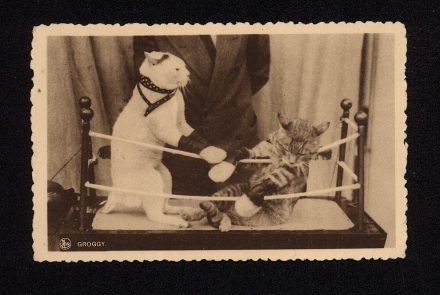 Pam’s Pictorama Photo Post: I usually hold the line against these posed cat photos, but once in awhile I am sold. Previously I have caved on Flying Dutch Kitties and Breaking News and this is the latest entry. This card was never sent and there is nothing written on the back.

I am somewhat curious about the man in the double breasted suit behind these battling kits. Odd attire for a referee I would think. It’s hard to see at first, but the white cat has a very striped tail. That must be an interesting looking kitty. A close look also shows us that these kitties are wearing harnesses which look rather hateful really. Everyone has their piss-cat ears on.

The cat boxing concept has long been put forth in various forms. (I have covered some of this territory before in my prior post Cat Boxing so I apologize for any repetition.) I am convinced that it all grows out of the natural tendency of cats to, well, box. Anyone whose lived with a couple of cats has seen this show eventually. Cats will stand on their hind legs and, often in a sort of slow action (I call it slow mo’ boxing when Cookie and Blackie go at it) engage in a kitty version of fisticuffs. It entertains the heck out of me when they do it, although by its very nature it usually descends into a proper fight, and everyone has to be separated and sent to time out in their neutral corner. The very best recording of this is the Youtube sensation, Cats Playing Patty-cake which never seems to fail to elicit peals of laughter from me. (As good as drugs really for a day when I am especially down.)

Back to the beginning of cinema, among the earliest surviving images from the dawn of film, is a famous half minute film of two kits going at it, Boxing cats (Prof. Welton’s 1894). It isn’t hard to see that Professor Welton is manipulating the cats in question – much as I assume our be-suited friend is in this photo. Kim says he remembers as a kid being entertained by a similar act on Ed Sullivan and his dad, Gene, telling him that it was all faked – and about the early kinetoscope version.

I can’t remember the first time I saw the film, nor the first time I saw my own cats do this dance. I can say that, more than any cats I have ever known, Cookie and Blackie seem more comfortable standing on their hind legs in general and they will routinely square off at each other this way. (I, of course, have assumed that this is an evolutionary step forward for cats, but perhaps that is another post. It is the way my anthropomorphizing mind works.) Given all of this, I am pretty sure that somewhere, somehow – perhaps in the remote areas of Russia where performing animal acts still thrive – there is a cat boxing act still on the road. The distant descendants of Professor Welton and generations of Vaudeville performers.  And, if not, we certainly have Youtube! 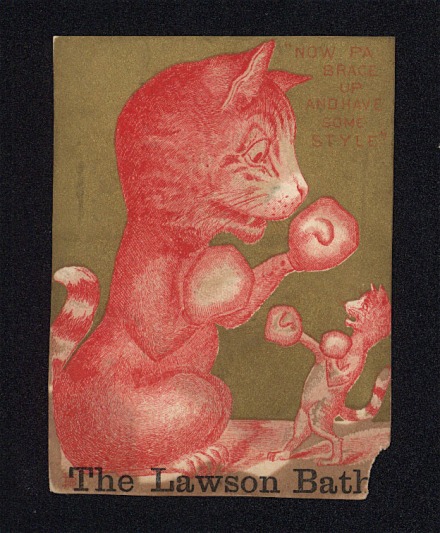 Pam’s Pictorama Post: This summer of cat advertising cards continues with this newest in the series by this popular artist. I do not know who this fellow or woman was, but he or she had a significant share of this trade. I love these! Each one seems a bit puzzling, but the group seems to form a loose narrative. Perhaps when I get enough of these together I will see the whole story.

This card barely left space for the ad at the bottom – I couldn’t find a reference to Lawson Baths, clearly printed on after the card was already made. The overgrown baby cat seems to be the one saying, Now Pa brace up and have some style. It is the same toothy cat as in the post Arctic Baking Powder and, probably, more recently the entry Westerman’s Shoe Bazaar.

It is perhaps politically incorrect of me to say, but I have always been a fan of cat boxing. I am not alone – film of cat boxing goes back at least to Thomas Edison – 1894 Boxing Cats. A quick look turned up the very delightful Cat Fight in Boxing Ring with Dog Audience – sort of a variation on the Dogville comedies, but as a commercial for Chevrolet. Kim says he remembers seeing cat boxing on the Ed Sullivan show. Of course of contemporary vintage there are many on Youtube, something along the lines of 1.83 million results at a quick look. A very popular favorite however is Cats Playing Patty-cake – I thought I would fall off my chair laughing the first time I saw it.

Cookie and Blackie indulge in this pastime occasionally. As brother and sister it seems it is natural to square off once in awhile, stand up on their hind legs and take a poke at each other for a few minutes – usually in slow motion. As cat fighting goes it is usually the least likely to get serious and many of these early filmed efforts are likely to have been staged – although I will say those cats really seem to be going at it in the Chevrolet commercial. It is mostly very theatrical, even here in the apartment. I don’t know why, but it does make me laugh when they do it. I will let you know if I manage to reach for the iPhone to tape them at it any time soon and we will make them internet stars!