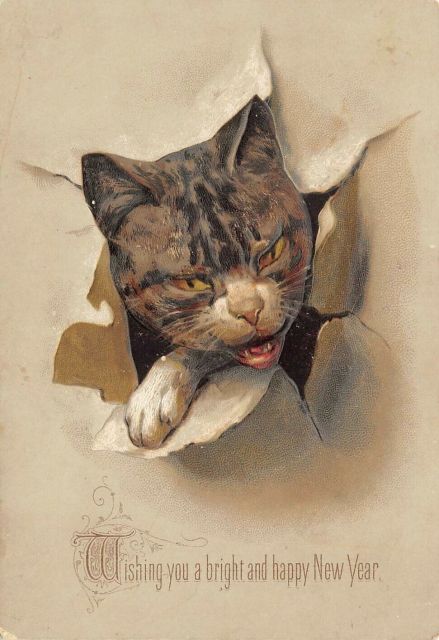 Pam’s Pictorama Post: A admit to being a bit stuck on the New Year’s theme this year – I wonder what my subconscious is trying to tell me. However, I scarfed up this card recently as its somewhat three dimensional embossed-ness appealed immediately. I am taking this opportunity, therefore, to consider Chinese New Year and the upcoming celebration of the Year of the Rat.

Starting with considering this splendid card, I will note that this realistic puss has a toothy look that makes me think he would happily eat the rat or any rodent in question. The card was never mailed, but in a penned script on the back it reads, Bro Rob – Wishing you a very Merry Christmas Harry. It is undated. It is deeply embossed, making writing on the back a bit difficult, but contributing to its sense of depth.

I don’t know anything about the Chinese horoscope, but I do feel like I am hearing a lot about the Rat this January. The Rat takes us back to the beginning of the 12 entity cycle which gives me a sense of beginnings and the turning over of new leafs. (Perhaps like me, you have many leaves and are still considering which might be ripe for turning.)

I was walking home from the gym last Sunday, which was an incredibly unseasonably warm day for January, more like spring. As I strolled down 85th Street I noticed a rat in a tree well, dead, but oddly appearing like he was napping. I thought to myself that the Year of the Rat wasn’t working out for him – having missed such a very nice day, not to mention the commencement of his year. We’ll hope he did his time as a rat and was moving onto a better incarnation.

Generally rats terrify me. (Even this dead one made me scream a bit and jump.) I have an irrational fear of them. I am unsure if it was growing up on the water where water rats are enormous and fierce; we were warned about them as children, or just something about me and them. (I go into some detail about this in a post called Ratters and Mousers which can be found here.) Meanwhile, admittedly New York City rats are like large mice by comparison – the mice sometimes so tiny that they look more like spiders.

Everything is bigger outside of the city – the mice, moles and shrews of my childhood rodent catching cats were outsized by comparison. I was amazed when I moved here and worked in a restaurant kitchen with mice so small that sometimes they were just a blur of movement I would catch out of the corner of my eye.

My dead street rat victim notwithstanding, the rat and the year are considered to be lucky ones. I have a personal (and also frankly irrational) preference for even years. This applies equally to the year in question as well as to my age – they are in sync for me. I don’t remember when I developed this preference. A friend recently posted that her shrink says the even years are the ones for catching up.

I am a Dragon – the only imaginary animal in the Chinese Zodiac. I am told we have tenacity, courage and confidence, as well as arrogance and we are aggressive. I guess I can own up to most of that. My sub-set is Wood Dragon though, which is a tad less charming as we are tagged as introverted (I am guessing you all at Pictorama may not entirely agree) and less enthusiastic. However, I read that mine is a lucky career year in particular and I say, May the Year of the Rat begin!

Pam’s Pictorama Post: In honor of the onset of Chinese New Year today – Happy Year of the Rooster! – I decided to focus on this heretofore unsung cat member of Deitch studio. Years ago we spotted and admired one of these lucky “beckoning” kitties at our favorite Mexican restaurant across the street, a splendid hole in the wall establishment run by a Korean family, where we get our Friday night take out every week. I hopped down to Chinatown and picked one up for Kim. I think it was an anniversary gift, but it might have been Valentine’s Day. Our little fellow waved cheerfully until the batteries ran out – then sadly the innards fell out when we tried to change the batteries. Waving or not, we remain fond of him despite this and stubbornly cling to the idea that he is indeed lucky.

My friend, Mr. Google, was ready at hand to tell me that this kitty is Japanese, although popular with Chinese merchants (we will have to assume Koreans as well) and has the official name Maneki-neko – roughly translated as beckoning kitty. Evidently these are modeled specifically on something called a calico Japanese bobtail – and yep, I checked and sure enough he is indeed a bobtail although ours does not indicate calico as some do. His red collar is just that, the kind of collar cats would wear – bibs with little bells to scare off the birds. (I saw a cat wearing such a contraption in Tibet in a monastery once – the cat looked rather aggrieved, although I assume he or she was used to it. Made sense to me that Buddhist monks wouldn’t abide bird catching.) 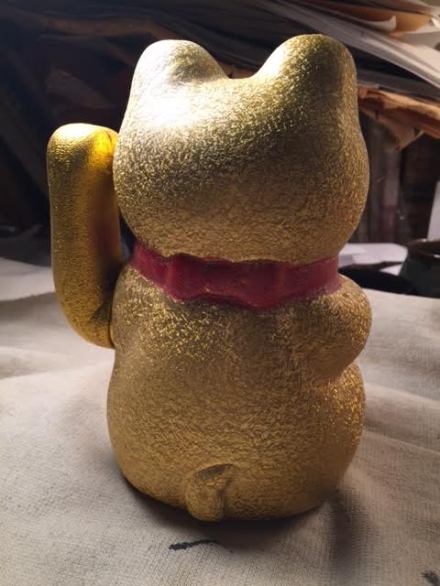 From the back, bib bow and bobtail shown

The large item in his right paw is said to be a coin – the promise of good fortune. They are available in red, black and pink, as well as gold, and different colors mean different things – good fortune, luring away evil spirits, and love – of course! And they are produced in every medium from porcelain and plastic to metal and plaster. Frankly, we can’t decide exactly what ours is made of, perhaps a pot metal. I read that the calico ones are the luckiest – that’s what they have at the Mexican take-out. I show you one of those below.

Calico Lucky Cat, not in my collection

I was the Secret Santa to my boss this year and I gave him a  tiny plastic version of one of these. I figured there was no more appropriate gift than that for a fellow fundraiser, but don’t tell him. Santa should remain a secret.

As Pictorama readers already know – and despite what you might think otherwise – black kitties are actually considered good luck by many and certainly we are of that opinion here at Deitch Studio. In a past post, Lucky Black Cat, I give a look at an early flyer that sold all sorts of lucky black cat paraphernalia. In an earlier post of the same name, Lucky Black Cat refers to a stuffed black cat held by Olympic British swimmer Ruth Moris-Hancock in a photo card circa 1936. Still, we’re secretly relieved that Blackie has that nice white badge on his chest – we wouldn’t want anyone to be scared of him!