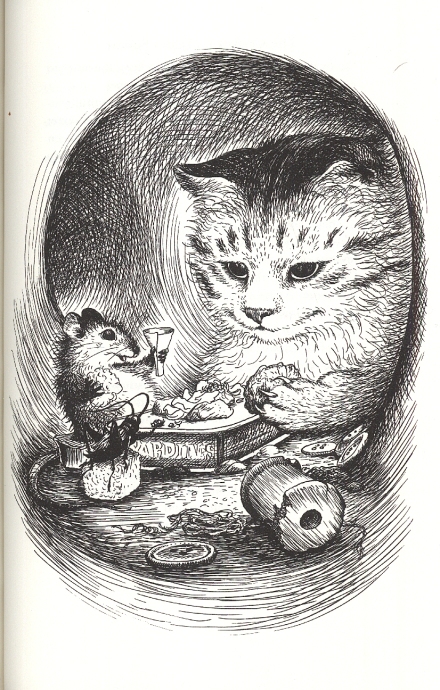 Pam’s Pictorama: I’m on a bit of a tangent today. In a previous post, Push Kitty, I mentioned my affection for the illustrator Garth Williams. For me The Cricket in Times Square, illustrated by Williams and written George Selden is a nearly perfect children’s early reader chapter book. As a committed New Yorker, I love the view of a somewhat period yet timeless New York, as seen from the ground up, in Grand Central station. Much like Charlotte’s Web it is a story that pairs unusual animal friends. There is the glorious, fluffy fat cat, Harry – he exudes purrs and tummy rubbing – and of course his wily friend Tucker the rat. (E.B. White did something entirely different with his story of a pig and a spider who become friends – and take on the subject of mortality of all things – whereas this story is about being far from home, and how even a cricket can make his way in the big city with a bit of talent, pluck and good friends.) 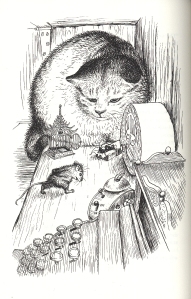 Garth Williams, (b. 1912-d. 1996) illustrated piles of children’s books – many of which became classics including Stuart Little and the Little House books. He wrote several as well, but it is the clutch that I have mentioned here that form an archetype in my mind. His illustrations are so synonymous with these books that, at least for me, his style is just what I think of when I think of children’s books and my earliest book experiences. (On his wikipedia page you can read about a book he wrote and illustrated, The Rabbits Wedding, which sparked controversy in the South because one of the rabbits in question was black…)

For those of you who don’t know the story of The Cricket in Times Square quite simply the Cricket, Chester, has found himself in Grand Central station, quite out of his element and country origins. He is adopted by the rat and cat duo, and a small boy whose father owns a newsstand, and who takes him as a pet – even supplying him with a cricket cage home acquired in Chinatown! Chester repays the kindness by providing cricket concerts in the train station, which makes all activity cease briefly and ultimately makes the newsstand wildly popular. Of course, eventually Chester, homesick, has to find his way back to the country, where I guess crickets belong. 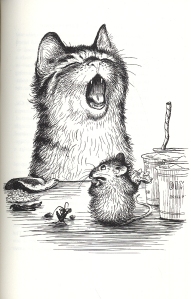 I don’t remember my first reading of this. I believe I read it myself, rather than having it read to me, as was Charlotte’s Web by my third grade teacher. But the story and the illustrations – ones that made not only a kitty, but a rat and a cricket lovable, stayed with me forever. The book is still in print, but sadly only in paperback – luckily I believe that version does contain all the illustrations. (I was able to acquire a hardcover copy in excellent condition a few years ago on Amazon or eBay.) It is my favorite book to buy for the children of my friends – for those who have left the New York area I consider it my subversive move to convince their children that New York City is the only place to live – a world of wonders! Maybe you will consider it for a juicy little reading project as we head into fall this year. Let me know how you like it!