Pam’s Pictorama Post: I have what I consider a very entertaining detour today which I hope serves as a sort of Pictorama pick me up for readers. The photo I am featuring today is one I have owned now for a very long time, I think it is safe to say it has been on our wall for more than a decade. (In fact I just found evidence that it was on sale on ebay in 2008.) I do not remember what I paid for it, however I do remember it came dear and it was a real dog fight at the time. It holds something of a place of honor on the walls here at Deitch Studio.

In researching yesterday’s post I stumbled across a photo from the same session. We took our photo off the wall to have a better look and since it stubbornly refused to allow itself to be hung again, I decided it was telling me it was time to tell share it and tell the story.

Clearly Pat Sullivan and a woman I am informed is his assistant and wife, Marjorie, are sorting through this enormous pile of submissions for a Draw Felix the Cat contest. If you look carefully in the pile you can see ads for the contest as well as drawings. The Felix in the corner is a large cut out which appears to be made of wood. The real treats in this photo are what is hanging on the wall behind them to the extent we can see it.

Aside from that great poster for the cartoon Gym Gems featured on the back wall, we’ve looked at it under magnification and have found the following – above the desk and nearest Sullivan there is: a portrait drawing of Mabel Normand, signed; a photo of Sullivan and wife in a car with an enormous Felix (I really want that one!); two signed photos of Charlie Chaplin; a drawing of a woman in a dancing costume and two other signed photos of male actors we can neither recognize nor read.

There is a reproduction of the Met’s painting by Pierre-August Cot, The Storm, of a young couple dashing through the rain. (Kim also had a color reproduction of this on our wall for many years until it faded into blurriness.) There is a piece of cartoon art under the poster for Felix Minds the Kid but the information is no longer retrievable. Lastly, there is a photo of two wooden Felix toys which appear to be writing, Hello Pat and a drawing of a nude woman from the back which is ornately signed, but I cannot make that out either.

While researching yesterday’s post, I stumbled across another version of that photo, clearly taken the very same day, with Marjorie and Pat in the same clothes. In this version, they are virtually buried under the drawing entries now, as is the desk and if you were to ask me I would say Marjorie is getting tired of this. (A poster for Felix Revolts has been revealed as well as two more drawings which I cannot make out. The top one, just revealing Felix, might be sheet music?) The nice composition statue of Felix which is barely visible in my photo is nicely revealed in this one.

Collection of the State Library NSW

The most interesting thing that I noted is that the Felix in this photo appears to be drawn in, unlike the wooden one placed in the earlier photo, complete with shadow and all. It was clearly used for newspaper reproduction with the telltale sign of the gray paint to emphasize and edit the image.

Meanwhile, written at the bottom of this photo it states: George Taylor’s old Sydney cartoonist friend – Pat Sullivan and his wife Marjorie wading through some of the final selections from hundreds of thousands of entries in the “Draw Felix” competition in New York in 1923. He was already acclaimed ‘the most popular American Cartoonist’. But he was born in SYDNEY! This photo is identified as being from the State Library in New South Wales.

I don’t know where the writing at the bottom originates, but the date on the contest is wrong because Gym Gems doesn’t come out until 1926. A quick search on George Taylor of Sydney in the 1920’s points to a journalist and aviation pioneer of the time as a likely candidate of the origin of the photo and whose dates are fairly parallel to Sullivan’s.

It was the image below, also from the State Library NSW, that inspired my entire collection of photos of people posing with giant stuffed Felix-es – and eventually this blog. It was the first one I ever saw and years later when I had my first chance to snatch one up I snapped to it. 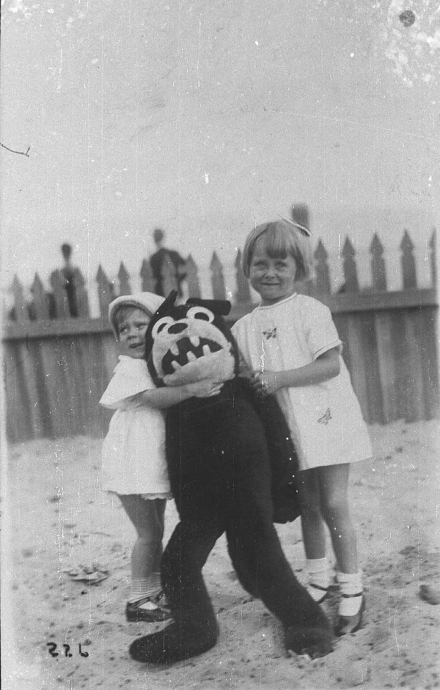