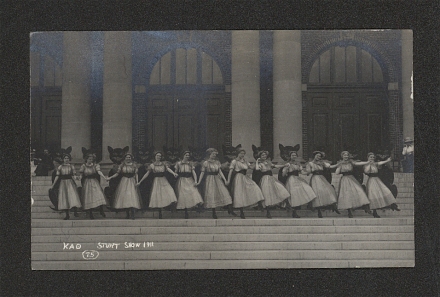 Pam’s Pictorama Photo Post: This was one of those second chance images that I recently caught up with on eBay. The row of toothy, grinning black cats behind this series of come hither girls is an image that I love.

I do not remember seeing the KAO Stunt Show 1911 (75 encircled) that is printed on the negative at the bottom on the first card. This card was pasted into a black paper album according to the evidence remaining on the back. Also printed on the back is, Strauch’s Student Life Series University of Illinois, Champaign-Urbana. I cannot seem to find a full history on this, but it would seem that this series of photo postcards just illuminated the fun and games of being at the University of Illinois, Champaign-Urbana, in the teens. This one below was recently sold on eBay and May Day in particular seemed to be a wild and wooly time there. (It is numbered 10 I see and mine is 75 so we will assume it was a substantial set.) 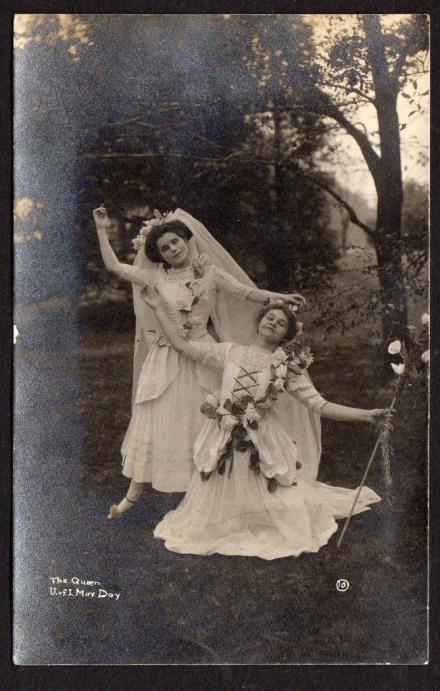 I must say, between May Day and dancing girls in front of a line of smiling black cats, it certainly would have attracted me to attend U of I. (Connecticut College was just never that interesting.) Another card recently sold on eBay, just called May Day 1913, shows a couple of hundred people seated in bleachers, presumably watching the festivities. Someone has circled part of the crowd to point out themselves and a group of people they knew. It too was in an album. So it seems it was a series of pro photos issued annually by the school, highlighting the year at the school. You have my assurance I will be keeping an eye out for more.