Pam’s Pictorama Toy Post: More toys today as the birthday bonanza continues and today is the second of several posts devoted to the subject.

I believe I have mentioned that it is our habit to spend the day on or near my birthday just me and Kim poking around some haunts I have found or we haven’t been to in awhile. This year my birthday fell conveniently on a Sunday. Having said that, it was a torrential, monsoon-like downpour the entire day. Nonetheless, we put on our boots and our storm coats and headed downtown. I had a line on a toy seller who I had attempted to hunt down in midtown (he was closed the day I went), but I had subsequently moved to Chelsea – and now we discover sadly there is only a single building housing a number of vendors. This shop is called simply The Antique Toy Shop New York (theantiquetoyshop-new york is the link) which does make it turn up conveniently in internet searches on the subject.

We hadn’t been to this area in Chelsea in a long time and did not realized that the garage weekend market, where we had spent numerous happy hours, is now gone, along with the building full of vendors next to it. (Kim and I can both remember when in addition to these there were two huge lots on 26th and 27th, now the site of enormous high rise buildings, were the weekend playground of those of us who like to pick through piles of old and ancient stuff.) So it was a sobering start to the day and as the rain grew ever harder Kim and I dashed east into the building on the south side of 25th Street, me no longer feeling confident about our mission. We wandered the aisles, dripping, poking our heads into various dealers enclaves, pausing briefly to dally in a rather fabulous space devoted to wind-up phonographs, old radios and a single ancient tv which showed an image. While we have been tempted to purchase a portable wind-up player for 78’s in the past, and they had a beaut, it is not a current focus (where would we put it?) and after enjoying the atmosphere and music for a bit we pushed on.

At last, on the landing heading up to the second floor, I saw a case with a few toys and I knew we were finally hot on the trail! Indeed, above and right near the staircase was a tiny space, packed tight with toys and a man taking photos of large gauge metal vehicles on the floor. The proprietor, Jean-Pol Ventugol, welcomed us in we squeezed our soaked selves into his space. I placed my bag on the floor, the better to maneuver in the pleasantly cramped space – chock-a-block full of glorious toys – but even my coat was catching on precious toys.

Perhaps luckily for me, it wasn’t a cat bonanza or we could have broken the bank quickly as his prices, definitely fair, were not bargain basement and he is stocked with fine, high-end items. There were numerous toys that I had never seen that appealed to my broad collecting taste which were not cats however. Among them two especially attractive Steiff dogs and two fine examples of French growlers – which for those of you not in the know are large paper mache bulldogs ,complete with raffia ruffs, which open and close their mouths and, well, growl. (I have wanted one for a very long time, and I will find mine one day I am sure.)

Mr. Ventugol warmed to the subject as I asked questions about various toys and asked to see several as I made up my mind. As we got into toys a bit and he understood my predilections showed us this a really splendid early French game, bad photo of it below, which is ancient, but electric and the cats and witch’s eyes light up when you hit the witch with a small ball! Amazing! 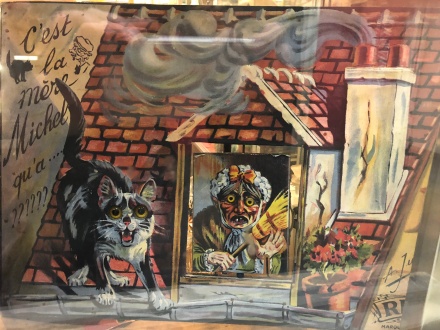 There was also an early Snow White top, the kind where you pump it to make it spin, which Kim was deeply enamored of. For me, taking wallet and desire into consideration, it came down to a celluloid wind-up Bonzo I have been chasing at auction for awhile, or this rather excellent, wind-up pig below. In the end, Bonzo’s fragility terrified me. (Pictorama readers know of my Fear of Celluloid despite some indulgences in that area such as my extraodinary Happy Life Toy – a truly beloved possession!)

This sturdy Schuco toy I settled on is a somewhat surprising choice – although his sheer heft and excellent condition is a joy. (His tiny but solid and nicely marked Schuco key winds him up.) However, it was his movement that got me in the end. I am a sucker for wind-up toys with great movement and he is a joy when he fiddles! He is an early version of one of the Three Little Pigs, which was ultimately produced again and again in lesser versions. He is, I believe, from the first trio, I assume made shortly after the Disney cartoon shot them into fame in 1933. I show a photo from the internet of all three with their boxes. 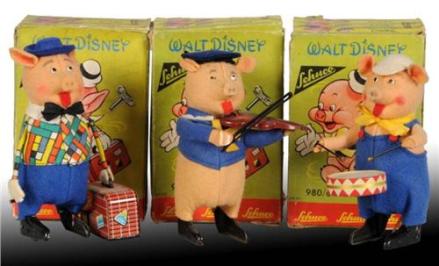 All 3 Little Pigs, not in Pictorama collection

Oddly, I realized as I prepared to write this that a number of years ago, five or six I think, I purchased another wind-up pig on my birthday. (What does this unconscious tradition say about me I wonder?) I procured this little porcine fellow, below, online from a dealer on the Ruby Lane website. I put together a birthday buy with some other tin toys, but this fellow was best of the group. He has no markings and he is a bit loose in his joints, but I just love the little cane he carries and his jaunty hat perched atop of his head! 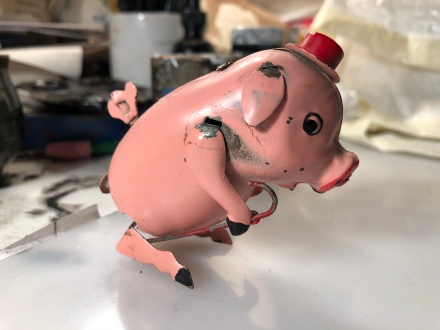 So, as we leave this post, I purchase this fine fiddle playing fellow, and have of course pledged to return to The Antique Toy Shop another day. Bonzo awaits  perhaps, as do I hope many other, yet undiscovered toys. Thank you Jean-Paul!