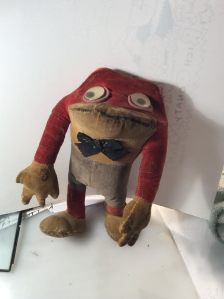 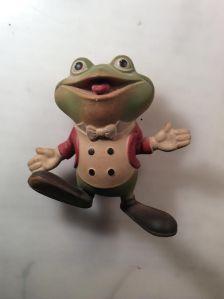 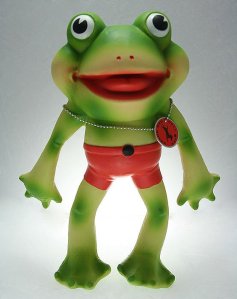 Pam’s Pictorama Toy Post: The Frogs have it! Let me start with this – I don’t collect frogs. (Not that there’s anything wrong with collecting frogs.) However, as a toy collector these three have found their way into our home. Starting with Flip who I purchased on eBay. He is made by Dean’s Rag Company and I consider him an undervalued toy. Mine isn’t in pristine condition (he’s an old, old frog after all) but I bought him, unchallenged, for very little. No one needed Flip that day, but me I guess.  I am a fan of the Flip the Frog cartoons, although it wasn’t until well into adulthood that I caught up with them. (Kim introduced me to them. He saw them on tv as a child – says it was big news in their house when they went on tv. I’ve already discussed how impoverished my childhood was compared to his.) I can’t resist including a specimen cartoon – I don’t remember seeing this one before.  Flip really is one strange looking frog – even when he isn’t playing a dentist.

Next up is Froggy. This toy came to us as a wedding gift – thank you Monty! Smilin’ Ed and Andy’s Gang did not make it into the rerun tv packages of my childhood either, and I was introduced to Froggy and company while Kim was working on his book Smilin’ Ed.  (Brief commercial for the family product: you can find Smilin’ Ed here.) Kim worked on the story through our early years together so Froggy has endeared himself to me, despite being absolutely evil in the book. Here is a clip of Froggy in action (Incidentally, I have always wondered why there don’t seem to be any Midnight the Cat toys, but they’d probably be sort of scary anyway.)

So you can imagine my great surprise when a few years ago I wandered into the mall at Columbus Circle just before Christmas and there in a pop-up shop I found the new Froggy shown here! That’s right, someone found one of the variations on the Froggy toy and recreated him….as a dog toy. I bought up the few they had in stock and later found the company online. Needless to say, several people received Froggy toys that year! Should you wish to order a rather expensive, lead-free dog toy for you or someone else who appreciates vintage tv you can do so at Roll Over Red Rover. Perhaps given his misdeeds it is Froggy’s karma to end up reincarnated as a dog toy.

One thought on “Flip and Froggy”