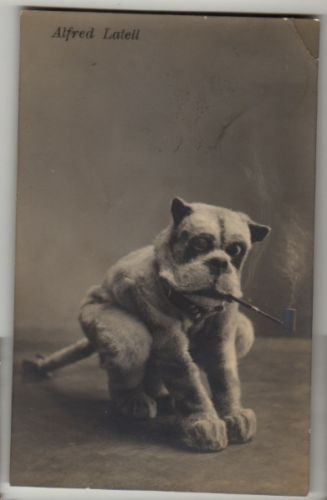 Pam’s Pictorama Photo Post:  I had my eye on this postcard on eBay for a while – holiday purchases needed to all be complete before I could justify the splurge and buy it. I adore animal imitators from the turn-of-the-century – starting with the 1907 Dancing Pig from France (possibly the very best short film ever) to George Ali as Nana in the 1925 Peter Pan – and all those wonderful early Wizard of Oz films. I love them all! Kim knows my passion for them and this is one of the first drawings he ever gave me – Animal Impersonators – a play on the idea.

This postcard was used. Addressed on the back to The two Brothers “Mathuss” Cassimo si Paris Theater, Burner Pesth, Hungary. The postmark is illegible but the message reads, in English, Dear Boys, good wishes to you. great success. My sincere good thoughts. Your father. The photo studio is Atelier & Bromsilber which seems to have been a well-known studio.

This photo is my introduction to Alfred Latell whose career evidently started in 1902 and lasted into the 1940’s. Online I found a 1936 ad for a show with Alfred Latell as, yep you guessed it, Bonzo Dog – which is how this card was also advertised. An online Encyclopedia of Vaudeville calls Latell one of the most curious acts in vaudeville. It says, He specialized in the impersonation of animals, not only dressing in various guises but also providing the appropriate noises. He began his career in 1902 and by 1909 had gained considerable notoriety for his imitations of monkeys, billy goats, bears, and dogs. It was the last animal that Latell found the most difficult to imitate, for as he explained in an article in The New York Dramatic Mirror, ‘To play the part of a dog and not to buffoon him, one is obliged to make a close study of his every action. The dog is so close to mankind that he is know more intimately than any other of the domestic beasts, with the exception possibly of the horse…The cat is a difficult animal to impersonate, though not so much as the dog, because of the fact of its slower movements. I have gone out at night with my cat suit on and have sat for hours watching the smaller back yard cats as they stalked along the fence or sat watching the moon rise o’er some neighboring buildings.’

He went to great lengths – rigged up a hind leg, improving his dog movement, and had a special tube made for his mouth which allowed him to appear like he was lapping up milk.  With a string he could raise the fur on the back of the cat suit! He also impersonated birds, ‘The parrot was one of my first bird impersonations, and I found it one of the most difficult of all, because of its crouching posture and the consequent tendency to fall over while walking.  There are nine strings which have to be operated in working the head, bill and wings, and the work is laborious in every sense of the word.” (The Art of Animal Acting, The New York Dramatic Mirror, May 1, 1909.)

Evidently Latell had an act with one and then a subsequent wife – his characters did not speak and he had to perform with a partner who would introduce him and do the talking. The internet is spotted with a mention in Green Book here and an ad in a theatrical paper there. His career peters out with a random performance or two on Broadway in the 1940’s. I was not able to find any film clips of him to share. For another photo of him and a bit more information, I refer you to another WordPress blog post Stars of Vaudeville #561.As a salute to great anthropomorphic animal entertainment, a link to the wonderful French dancing pig below!