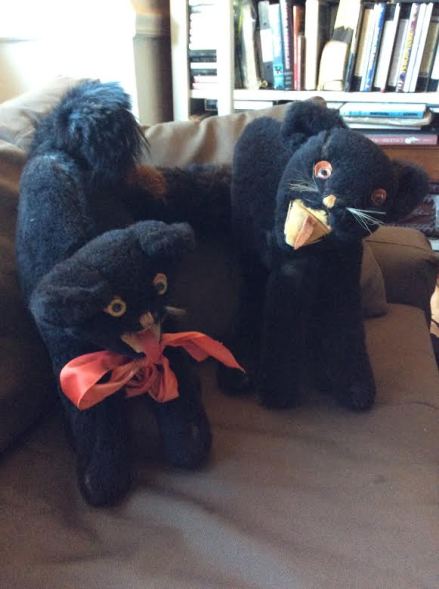 Pam’s Pictorama Toy Post: As we continue on with our Halloween theme, I present two splendid kitties from my collection. The first of these cats was among my very first purchases in the world of black cat toy collecting, and it is still among my very favorites. He, along with another excellent, much earlier cat (a future post) were scored in an antique store in Red Bank, New Jersey – near my ancestral home, while on a weekend junket to visit my parents. The second was purchased on eBay. That seller told me that it had been a prize his or her grandmother had won on a push pin board game in a store, and that it was from the 1930’s, which seems about right. This seemingly appropriate example of one of these prize boards is below, grabbed off of the internet. 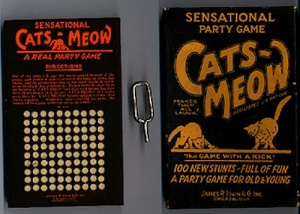 There was great excitement from Blackie and Cookie when I took these cats down to be photographed! The arched back, tail and ears is enough for them to read angry feline and react in-kind. In addition, these cats in particular, still carry the irresistible smell of attic and mysterious old things. The combination really wound these guys up this morning.

Both toys are in pretty superb condition – one maintains his bow – and sport magnificent fluffy tails, and virtually no bald spots on their plushy fur. The eBay one has a few condition issues – he does not really stand on his own any longer and his tail lists permanently to one side. Pretty good for a couple of elderly fellows though. They are the cheerful guardians of my cat shelf. I admit, I couldn’t pass one up and would contentedly buy additional ones if I found them. I mean, who wouldn’t? 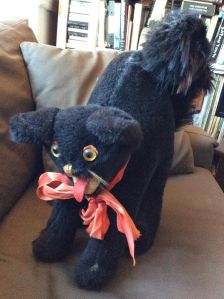 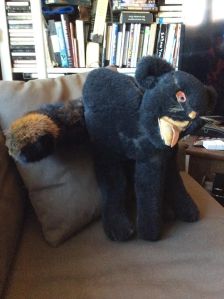