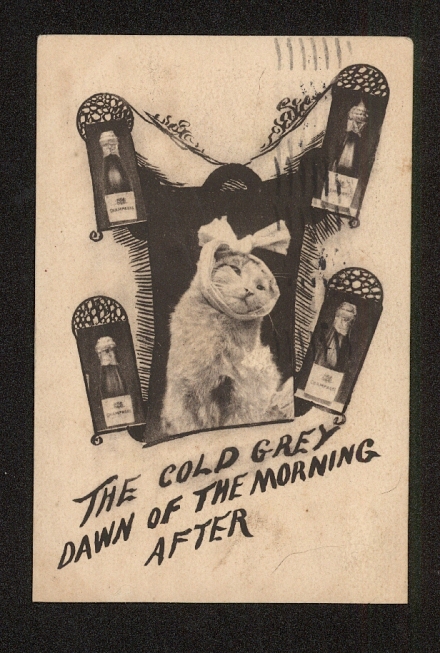 Pam’s Pictorama Photo Post: As always, waking up on January 1 is a bit sobering, even to those of us who did not seek year-end oblivion the evening before. The cool gray light of that early January morning is the time when we put the old behind us and embark on resolutions and new leafs.

I bought this fellow several months ago. He looks very unhappy with the operation of photo taking and one can easily imagine him off like a bullet a moment after the shutter snapped. The strange, somewhat amorphous shape drawn around those champagne bottles look a bit like something you might start to see crawling around on the walls after several too many – or perhaps during a fit of the DT’s a la Lost Weekend?

This weird period of photo collage fascinates me – a strange marriage of commercial and homemade. Some of my other posts of this interesting medium include Cat Photo Collage and Mad Jenny. It is a nascent tributary that photography went down, but didn’t fully take hold. Not so much a false start and a dead end – although by contrast elaborate photo albums that were collaged eventually were huge in their time. There was an exhibition about it at the Met which I loved back in 2010, Playing with Pictures: the Art of Victorian Photo Collage. (Some images from it can still be seen on the Met’s website indicated above.)

Resolutions in hand, clear-eyed and determined – here’s to the very best to all in the New Year!

2 thoughts on “Dawn of a New Year”