Pam’s Pictorama Post: For some reason I always have my eye out for a nice cat or mouse band. Thanks to Kim I am lucky enough to own a spectacular tin mouse band, which I will happily examine in detail with you some time in the future. I do not have a cat band, although I have seen one or two that I was wild about, but have never been able to obtain one. France did not provide me with cats, but instead this rather nice little band of faux Mickeys.

In yesterday’s post (Pepper Felix) I left you as I walked down Rue Auguste Comte, purchases from Antic Toys and Dolls in my shoulder bag, looking for the cross street to take a slightly different route back to the river boat I was staying on. It had gone from a chilly morning to a full on hot afternoon, I was wearing a hat, but even took the time to put some sunscreen on my arms which were burning. So I feel I was a bit of a mess when I was stopped in my tracks by the store window shown below – Antiquities Marilyn!

As you can sort of see from this photo, the window is so crammed with piles of random pieces of silver, toys, and bits and pieces that it was hard to really see anything, but how could I resist going into such a place? Facebook friends have already seen the inside of the store, but for the rest of you, below is a photo. This is pretty much the entire interior of the tiny store.

Marilyn spoke English and we chatted about her establishment a bit. While we were talking a man came in with a chandelier to sell and the three of us, and the chandelier, pretty much took up the remaining floor space. I let my eyes roam over the piles while they negotiated over the chandelier. Sadly, dolls as such and silver do not interest me hugely. My well trained eye wasn’t seeing any cat items. However, I had seen something in the window – a tiny band of Mickeys! I was a bit worried about asking her to actually get something out of the window, but much to my surprise she, being quite agile, had them out and in my hands fairly quickly while I examined a glass Bonzo dog that was missing some essential pieces. While I looked the Mickeys over the conversation about the chandelier ensued in French.

I like this jolly little band of fake French Mickey Mouses. They have a little bit of the ratty look I like in my Mickey. One has a chipped ear which shows that somehow the actual clay they were made with was black, rather than painting them. As my ongoing readers know, I like to keep my cat collection supplied with early mice for their entertainment.

The price she named seemed fair and, after a wander down the street to an ATM machine (the great international friend of the errant toy buyer) I secured them for my own. Chandelier man was very enthused and praised my hat (the French really seemed to like my sun hat – perhaps just the idea of it?) and my overall appearance. After he left Marilyn spoke to me about Dinky cars which evidently make up a large portion of her business. (I know, this would not appear to be the case…) She showed me one of a truck with a cat sitting atop a wedge of cheese (Dinky experts, perhaps you can explain?) which I did like, but felt is somewhere outside of my realm of collecting. Therefore, I bid her adieu and wandered back to my duties onboard the waiting ship, sated with a few hours of excellent shopping and collecting.

Pam Toy Post: In a first of several loot from France posts, behold this very odd item I purchased from the fine fellows at Antics Toys and Dolls in Lyon. I found the shop online before my trip and, since I was there on business not pleasure, I considered it a great stroke of luck that I had a rare few free hours in Lyon which allowed me to race over and check it out. The gentlemen there spoke no English (and I no French) and at first they seemed to have no idea what to do with me as a customer with a strong interest in Felix le chat and perhaps a Mickey. Their prices ran high and I dismissed several items which seemed over-priced, especially after Euro to dollar conversion. However, I purchased a small, lovely jointed bear (future post) and left the store.

I wandered down the street, noting with frustration that several antique shops were closed despite the fact that it was 3:30 on a Thursday which would seem to be a time when things would be open. I found a small shop that was, according to the owner, opening next week – although it seemed, for all intents and purposes, to be open. He sold me a lovely rose gold ring with a tiny diamond chip, which he dated around 1903. I would have added ten years to that date but can’t say I am an expert. Then I walked back in the direction I came from and when I walked past the aforementioned toy store something near the window on a shelf caught my eye – Felix! Back in I went and another owner seemed to have appeared in the meanwhile and he, having lived in Stamford, Connecticut for a year or more, spoke some English. Felix was fetched from the window shelf and, strangely, he turned out to be a pepper shaker – no salt shaker sadly, but even alone, a worthy and unusual item. A bargain was struck (after they showed me photos on their phones of the antique cars they own, I showed them photos of my Felix toys on my phone, and we discussed religion in broken English for some reason) and home to NYC Felix has come.

I have never seen this particular model. I would have maybe even thought he was homemade from other parts except for his rather professional poivre sticker, as shown, on the back. Early in my collecting I assumed that early Felix items might be largely French and German. I was surprised to find out that they are almost predominantly British. This item may indeed be the only French item I am aware of in my collection. 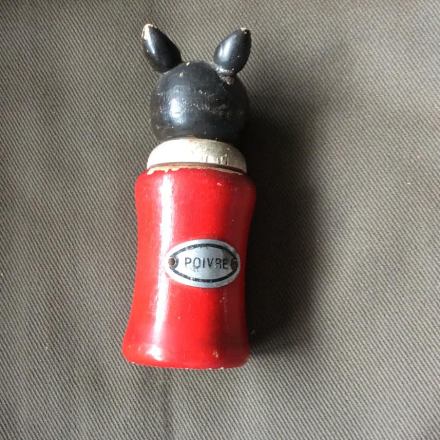 Meanwhile, next I wandered down the street to find Antiquites Marilyn and my purchase there which I will outline in tomorrow, Sunday’s, post.