Pam’s Pictorama Photo Post: Some strange things happen collecting photos on eBay and there are mysteries that will probably never be solved. I lost the photo at top in a dog fight of an auction back on October 6, 2015. Early this September, just as I was flying out the door for three weeks, more or less, of business travel, these two photos came up and I scored them easily. It is only now, happily re-ensconced in my Manhattan lair, that I have had time to consider the situation. While I knew that the earlier photo was of this particular Mickey eating ice cream ad, I had no idea that one of them was indeed the very same image until I dug it out of our Facebook archive this morning. The surprising part is, speaking at least the photo I now own, it appears to  be an original photo – not a photo postcard or commercial reprint in anyway.

These photos are small snapshots in the way early to mid-20th century black and white were. The images here blown up several times their original size which accounts for the slight breakdown of the image – they are sharp enough in person. Mine have the traditional white border around the edges. There is no date or further information on them – and of course I have two from that scene, not one.

Something similar happened to me years ago when I purchased serial photos, first from one group of auctions but then another months or years later, of the same scene of someone wearing an ancient Felix costume and posing with a cat by a car. It can be found in my post, Mysteries of Felix.

The top image is the better of the two for me and is fairly jaunty. The hand rendered, somewhat off-model (yet well rendered) Mickey is holding his ice cream cone victoriously and these kids are happy to be there. It is sort of classic really. The other photo shows a woman who looks a bit tired, carrying this little girl who evidently doesn’t know that ice cream is in the offing. The woman is attractive in her print dress, has earrings and a bracelet – and yet there is something sort of care worn about her. Late 1930’s or early 40’s?

Below is the one I posted on Facebook back in 2015. No border on that version. I guess we’ll never know, but I am glad to add them to my own Pictorama archive. 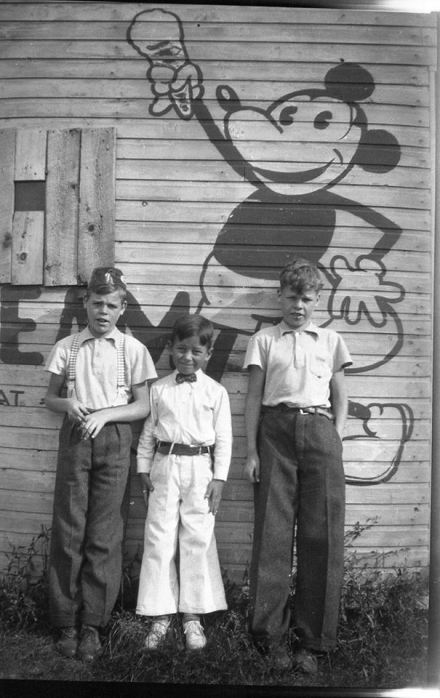