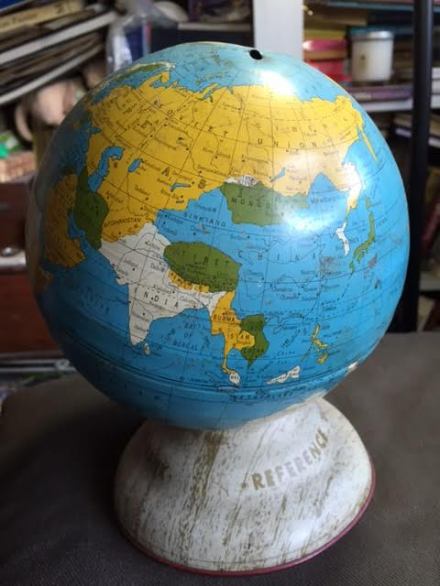 Pam’s Pictorama: I have owned this globe for a long time. I purchased it before Kim and I were seeing each other and within the next few weeks we will have been together more than 20 years in a few weeks. My memory, which is a bit dim on this subject, is that I bought it at a street fair here in Manhattan, in the early years of street fairs when people selling junk used to still show up and I haunted them many weekends. Sadly it is a bit dented and damaged, but my affection for it has never dimmed nonetheless.

A little light research has turned up a bit of interesting information. The internet dates this premium from the 1940’s. This seems about right since Tibet is an independent country on it – I had forgotten that I used to point that out to people and that it pleased me to have a globe where Tibet was not part of China. If I knew a little bit more about world history and geography maybe I could place it in time a bit more specifically.

Clearly, this was a bank giveaway, a piggy bank. Evidently World Savings was the name of the banks belonging to Golden West Financial. Now, as much as I like the globe idea, I would probably have used the name Golden West – sort of irresistible, yes? Who wouldn’t bank with them. Anyway, it was founded in 1929 (seems like an odd year for a bank to have started, but we’ll stick with Wikipedia on this) and existed in one form or another until the financial meltdown of 2008 when, heavily invested in mortgages, it’s remaining assets were snapped up by Wells Fargo.

Oh for the days when banks, gasoline stations and other businesses wanted our business so badly that they tempted us with toys, calendars, floating pens and lured us over with photo postcards! When did they decide they didn’t need to do this any longer? Nominal examples still existed during my childhood in the late sixties and early seventies, although I clearly missed the heyday.

I am a tad embarrassed to admit that this is the only globe or world map in the house. When Kim draws the world, he pulls it out and uses it for reference – which if you know his work you know happens not infrequently. If we need geographic information that may have been in flux over the last 90’s, we have the internet. So today we pay tribute to our jolly World Savings bank friend.