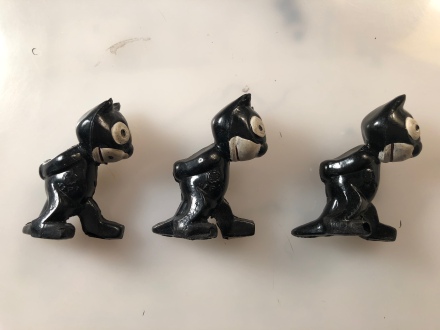 Pam’s Pictorama Toy Post: I will blame this purchase on my travel too as I saw these and put a bid in while I was away and won. Pictorama readers know I have a uncomfortable relationship with celluloid – it is so fragile! This has been documented in the past posts, Fear of Celluloid, Happy Life Toy and most recently in Ding Dong Kitty. Nonetheless, I bid on these on a whim – a single one was being sold close to these three, I figured why not bid on the three at the same amount as I would one, and here we are. (Total Pam logic on that one.)

They are identical except one still sports his tiny Felix copyright Pat Sullivan tag on the sole of his foot. Unlike yesterday’s Felix-es, these do not stand independently. One has a tiny hole in the bottom of his foot, but otherwise they are in remarkably good shape with no dents. An indication that they were produced in Japan is embossed on each if you look closely. The strange almost non-existent weight of them somehow brings a visceral sense memory of holding such toys as a child. 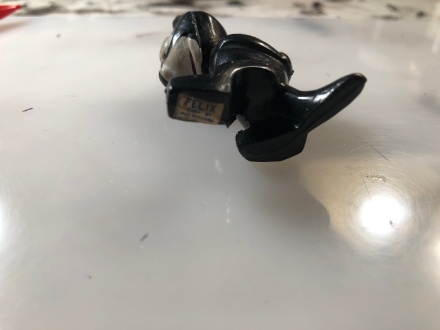 As mentioned above, I have already opined on the frail nature of these items and my wonderment on how something so breakable, an inexpensive toy a child would have played with, can make it through some many decades (blasting toward the century mark) relatively unscathed. It is amazing – and probably a credit to mass distribution in part. I would get the same feeling when at the Met I looked at the rare piece of Roman glass which somehow made it down through time unscathed – I mean, I can barely keep glasses in our apartment un-chipped or ultimately smashed, especially with the kitties. Those items somehow survived not only household pets and drunken guests, but fires, earthquakes and wars. Fascinating.

I worry sometimes about whether I am the best steward for certain items. I do not collect what I really feel I cannot care for, keeping china to a minimum for example; paper mache gives me pause occasionally. Those who have visited Deitch Studio know that this is far from being a glass cabinet-ed, dust free facility. Toys are actually pretty much stacked around us, tumbling (especially with the help of cats) onto the bed with some regularity. Somehow we co-exist, the collection and us sentient beings, but as this is a single room I do wonder about the ultimate tipping point. However, for now, these Felix toys are tiny even if there are three of them, and they live quietly on a shelf propped up by a mechanical mouse, in front of a clutch of film books Kim requires access to only occasionally.