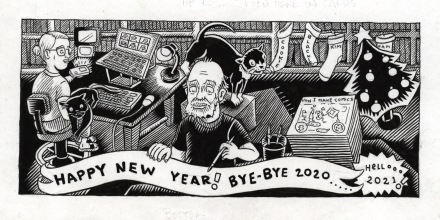 Pam’s Pictorama Post: This year’s holiday card, drawn by me and inked by Kim, is a glimpse into the reality of Deitch Studio – it really looks exactly like this! (Full disclosure, no Christmas tree, not even a small one. There really isn’t a square foot for even the smallest one.) This year’s card is more of a New Year’s one – recognizing the year that has been as we hope to kick it aside in favor of the coming one.

I recently wrote for a Jazz at Lincoln Center member newsletter that 2020 was rare to reflect on a departing year that could be considered universally horrid, but that is what this year has been. Folks have suffered egregious pain and loss from the pandemic, howled with protest in the streets despite it, and went back out into it in order to stand on line for hours to vote. We saw dancing in the street here in Manhattan when the Presidential results were announced, but like all things in 2020, even that has proved to be a torturous and rocky road on the way to resolution.

Much will be written about the year 2020 in the future I think, but for now behind that everyone is still dealing with it and the additional backdrop of everyday struggles which continued apace – one friend reports bedbugs, another has a parent diagnosed with dementia, a third falls and lands in the hospital – and all this in the past week. For many, 2020 is the year that just won’t quit, even as we reach the bitter end. The backlash likely to sweep well into the beginning of the New Year.

There are undeniable bright spots though and commuting by walking ten feet across our studio apartment has been lovely. We joke about it and friends and acquaintances marvel at it, but really, if you have already lived in one room with someone for decades doing it twenty-four hours a day isn’t much different, at least for us. Last March I was deeply tired from too much travel and many late nights at work and I have been enjoying my regular routine and seven hours of sleep nightly – frankly being told I would have to stay home and cancel all upcoming travel was not entirely unwelcome. (Earlier tales of quarantine life at Deitch Studio can be found here.)

I resumed all cooking duties and we have not only eaten right, but we’ve eaten quite well and my newly restored interest in baking has packed on pandemic pounds which I am now seeking to banish. (It is hard to develop a sense of urgency about it however when my days are generally spent in work out gear from the waist down. Baking posts can be found here and here for starters. I am munching a spice cookie from last week’s cooking adventure as I write this.)

I am fortunate to have a job and also to be able to work from home – Kim has of course always worked here and was the one who had to adjust and make room for me. Workdays have been long, sometimes starting at 6:30 AM and with the evening still finding me at my computer, iPad or phone, but without having to go any place it has allowed me to hone the work down to what is essential and a core fundraising message and method. Talking on the phone almost incessantly is a reality for me and, admittedly with a few bumps along the way, we have found accommodation.

Wynton Marsalis and I are on the phone so frequently that I joke that sometimes it is as if he is a third person in the apartment – asking after him always or shouting a jaunty greeting to Kim as he signs off a call, Kim tossing out the occasional comment when brought into the conversation. Kim now recognizes the sound of each person’s voice, not just on my team, but for the better part of the entire Jazz at Lincoln Center administrative operation. He listens to Susan and I discussing incoming funds and sometimes lack thereof; as Gaby and I working through a litany of media requests; me addressing my staff in meetings and sometimes even the weekly all staff meetings for the organization. Kim never thought he would know so much about how I spend my workday.

I think we will remember this year and shiver in remembrance of days and nights of ambulance sirens and deserted streets here, but I know we will also look back on it as a gift of time we never expected to have, tossed into our laps like a rough nugget of gold, waiting for us to figure out how to forge it into something. We have made good use of our time I think – been productive in our work – fundraising as always for me (if more urgently than ever), art as usual for Kim as he plows well into the next book. What downtime we’ve had has been spent reading – Kim finishing the last of the available Little Orphan Annie strips with regret, me working my way through wakeful nights reading escapist juvenile fiction of the early 20th century, Judy Bolton and now well into Ruth Fielding. (A post about my Judy Bolton pandemic days reading can be found here and here, and while a review of Ruth Fielding is in the works, I mention her in my post about the Miss Pat series and it can be found here.)

Our two cats, Cookie and Blackie, have more than adjusted to the change in human habits and all memory of the “before time” has been erased from their respective tiny feline memories. A real ham, Blackie comes running for Zoom calls on camera, meanwhile Cookie sleeps under my laptop which sits on an elevated shelf which Amazon delivered (along with a world of other things) months ago when my back kept going out. She curls up under the warmth of the desk lamps and between the two waving lucky cats (one recently retrieved from my office), cat kissing them occasionally – and then mystically, in the late afternoon, I look up and it is Blackie there instead. (A post about the lucky waving cats can be found here.) The cats are frankly shocked if Kim and I leave the house for any period of time now. We find them waiting anxiously by the front door when we return.

As I write this I am adorned in an ancient black hoodie that is years old, but has seen almost daily wear in recent months. I am wearing a wonderful pair of silky pj’s on the bottom, a recent purchase from the Gap, they are adorned with stars – a weekend luxury to be in them still so late in the morning, although I could live in them I actually make a point of getting fully dressed, as such, for workdays. Admittedly my “hard pants” and office clothes are now mostly providing nests for generations of moths I have not had the energy to deal with. (Moths are my version of the 2020 pestilence story.) I suspect by the time I get back to them I will chuck most of the whole lot anyway.

What does 2021 hold for us and how will we adjust and meet the challenge of finding our way in the next iteration of the world? I think about it often. We have all changed in the crucible of these strange days and I don’t think anyone will emerge from it the same or unscathed. I remind myself that we will emerge from our cocoons at some point (we certainly hope in 2021), and as our new selves step out into the world to be whatever we have become during these long, hard but interesting months. Here we go then, out with the old and in with the New Year!