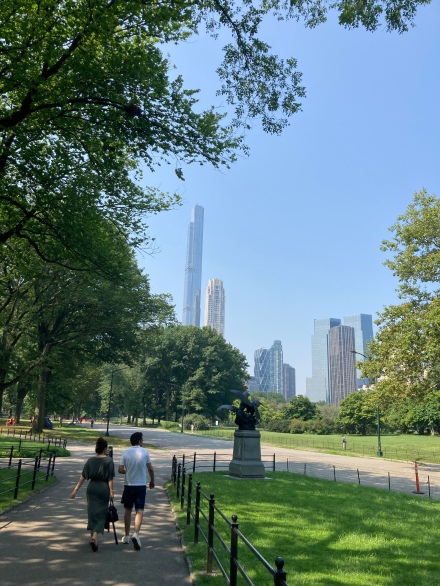 Pam’s Pictorama Post: Although I am presently reveling in a sea of newly acquired Felix photos, I am pausing today to take stock of my nascent (albeit partial) return to our offices this week. Although I have occasionally had reason to go to Columbus Circle throughout the fifteen months (and counting) of the pandemic, this week I asked my (remaining, greatly reduced) staff to join me for a day of clearing out and organizing in advance of a full return in September. We met first in Central Park for breakfast and a farewell to a favorite staffer who is leaving to pursue his PhD in musicology full time.

As an aside, I have set the goal of walking to and/or from work as often as possible. This regime found me walking two six plus miles trips this week. Let’s see how long I can keep that going. We’ll put the pin there for now and return to that in a future post.

Meanwhile, I had seen some of my colleagues when the Jazz at Lincoln Center Orchestra opened Summerstage back in June. (A post about that can be found here.) Others I had made visits to, an outdoor drink or coffee here or there, just to have an in-person meeting with them last summer or as vaccinations had eased restrictions. However, even with that there were two I had not seen in person and it was altogether incredibly lovely to have everyone together in person for a bit. Being together has meaning and does make a difference.

Energized and armed with tummies full of carbs we re-donned our masks and headed over to our building to spend the afternoon tossing out dated paper, old food and reorganizing our work spaces. Despite periodic visits into the office for specific needs throughout this period, I for one still had a desk piled with paper from the middle of March 2020, not to mention a cabinet with bags of nibbles such as dark chocolate and boiled almonds. We’ll assume a mousy fiesta was had as I also cleared some mouse dung off my desk.

I was deeply struck by a few things as I created piles of documents to keep for files, shred and throw out. The first was how very little of all of that paper I ultimately kept. I created two small files – one concerning a trip to South Africa and the other which was research for a project I have picked back up. Piles of paper went out. Everything else I disposed of and after more than a year of working at home, almost all of it without a printer, I have finally broken the paper habit.

More subtly, I realized that I work in an entirely different way overall now. As always, necessity has been the mother of invention and I learned to raise money differently over this period. While I know it, can see and feel it, I am not sure I can put my finger on exactly what it means for going forward.

Looking at some of the lists and paper left time capsule-like on my desk (I have been thinking of it as Miss Havisham’s desk), much of it seems incredibly ineffectual to me now. Gosh, why had I been wasting my time chasing this or worrying about that? Why did I think that would go somewhere? It made me wonder if the evolution was a natural one that might have occurred anyway, but I wouldn’t have had a chance to revisit this way – this snapshot of 15 months prior. Or has the change really been that radical? Probably a bit of both.

As I try to unpack how to bridge what used to be and what will be going forward, at least for now, my brain aches with the effort and I find myself exhausted trying. What was working, is working and might still work? I do believe part of me really was thinking that when we returned that we would pick up doing what we had before and of course that is not possible. While I understood that on some level, I don’t think I saw the divide as clearly and I have finally started to let go of that hope. But what is worth devoting time and resources to? Raising money isn’t like making widgets and cause and effect does not always tick and tie, but of course some analysis will help. Still, I continue to work my brain going over the mental territory over again.

Of course, in addition to this thorny knot, the future remains a great unknown. While that has always literally been true, the last year and change have underscored this reality and we weigh possibilities like angels dancing on the head of a pin – if this, then that, if not, perhaps this? Fundraisers are by nature long-term planners and being thwarted in my attempts to plan is frustrating to all of us.

I credit this period with making me more skilled at my job, but can those newly acquired skills transcend the nature of this ever-shifting tide? While there seems to be a great deal of discussion simply about working remotely or in-person, I wish there was more about how we might take the best from both rather than an either or – back to the old or remain in the nebulous new. It isn’t just about where people work from, but how they work and forge a new way of working. Let’s take the lid off and dig into to it a bit. Perhaps everyone isn’t having these sorts of revelations, but I would be interested to know if they are.