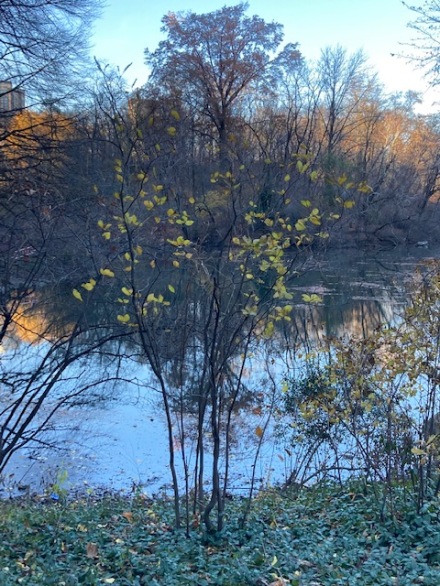 Pam Pictorama Post: It is pre-dawn here and a soft rain is occasionally ticking against the window. Despite a late night at work (Big Band Holiday concert) I woke early and chafed a bit at my self-imposed rule that I won’t run in the dark as part of me wanted nothing more than a slow run through the park at 6:00 am. It sorts out my brain like nothing else and in an effortless way I will never really understand, but am grateful for when I can employ it. However, instead, I sit down and write and think maybe that run will come later.

Recently in the process of interviewing someone, I was asked about my own plans for the future, where I expect to be in five years. I laughed to myself and thought, after the last more than twenty months of the pandemic, how can anyone actually ask me what I think I will be doing in five years? I sure as heck didn’t think I would be doing what I have been for the last twenty or more months with a basis of operations from our one room here at Deitch Studio, but the question has gnawed at me a bit.

I was reminded of when I graduated from college. I formulated a very specific plan which roughly involved getting a job cooking in a very good restaurant here in New York City, applying to graduate school for painting and then using that restaurant experience to land a good job and work my way through said graduate program, probably somewhere in the mid-West like Iowa, and then most likely teaching art and trying to sell my own work. (Yes, I had a lot of energy then!)

I achieved the first step on the ladder and landed the job in a restaurant cooking with a rising young chef star, Jean-Georges Vongerichten. I won’t go down the tributary of my cooking career for now, but only note that it ended abruptly with a fall down a flight of stairs which put me out of commission for that kind of physical work. Over time painting gave way to photography and these days this blog is most of the creativity I employ on a regular basis.

After the fall, so to speak, I took a job in the bookstore at the Metropolitan Museum. I was eventually hired out of the bookstore into the administrative offices and, for the most part, stayed there contentedly for the better part of the next thirty years. (I wrote about this on my departure from the Met about four years ago and that post can be found here.) I had never imagined working at the Met and I had never considered (or remotely thought about) fundraising as a career. And once firmly and happily ensconced at the Met I never imagined leaving.

I have tried to make considered choices and planned my career with some thought however. I developed a broad base of skills (such as annual giving, events) and ultimately specialized deeply in the areas that most people avoided – tax consequences of gifts, charitable estate planning and back office operations for example. (My best single piece of advice to people starting out is always raise your hand for the job no one wants – that and for goodness sake, dress appropriately for any interview.)

I embraced the opportunity to manage staff over time and took on overseeing a fair amount of hiring and on-boarding and compensation for that office. However, I always deeply enjoyed working with the individuals who supported the work of the museum and at least half my time was always devoted to that.

I had assumed I would retire from the Met. My decision to leave and run an office for a performing arts organization in many ways surprised no one more than me and it was a huge shift that left me reeling at first. However, the skills I had built up working at the museum have served me well.

Meanwhile, I think we can all safely say none of us expected the world to shift the way it did in March of 2020. It has been exhausting and exhilarating in turns. I feel as if I have grown decades of professional experience crammed into the past two years, approaching my work with a new efficiency as well as renewed urgency. I have often said that from that perspective I wouldn’t have missed it, but much like falling down that flight of stairs all those years ago, the path I thought I was on certainly veered wildly in another direction. We see a lot of folks making radical life changes as a result of the pandemic – changing where they live, where and how they work.

Recent months have allowed a return to seeing some of our supporters and friends in person. Last night was my first in the hall for a concert (I wrote about planning for and then missing our opening concerts in November in a post here), although I have been in our club venue on many evenings. A shift in staffing has meant that I am spending more time with folks and welcoming them in person. It is nice to be doing more of that again.

I have yet to respond to the question about where I expect to be in five years – neither to the person who asked nor in my own mind. I consider it for a bit this morning as the misty morning finally comes to light out the window.