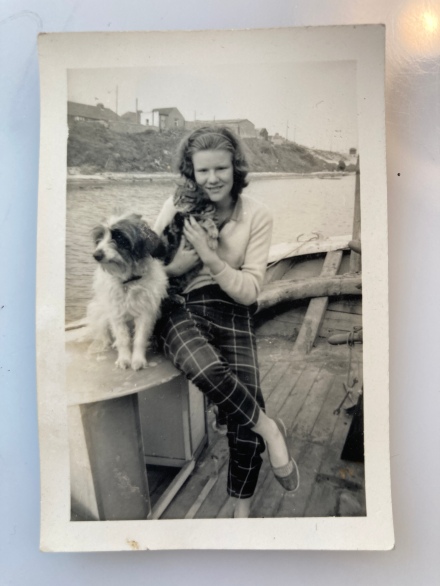 Pam’s Pictorama Photo Post: Today I have two lovely little photos which were sent to me with packages from Rachel @wassail_antiques. I discovered Rachel’s business on Instagram during the quarantine period and I have written about the wonderful bits of jewelry I have purchased from her – mostly British items from the earliest part of the 20th Century – a parallel universe to what folks were wearing in this country. Similar yet somehow very different. (I have written about these purchases here, here and here for starters!)

Rachel is a gifted photographer and the images of her items always tempt. In addition, the packing upon arrival is always lovely and heightens the feeling that a gift has come in the mail. Several folks I buy from include some early photos or cards in their package (some shown above), but I always feel that Rachel has handpicked the ones she sends me, knowing my aesthetic predilections and interests. Two are shown here today. Neither has any identifying information on the back.

My favorite of these is the young woman with cat and dog. I imagine that this is a boat she is on, but it is possible it is some sort of pier seating near the water. I like her plaid trousers and of course that she has scooped up this nice stripped kitty of hers as well as her faithful dog companion. The water of course and some sort of cliffs behind her. Kitty and dog seem to be looking at something off camera in another direction, however she smiles for the camera.

The other is also wonderful although a bit harder to see. A little girl perches on this soldier (my guess is her father’s) knee along with the canine companion who poses on his hind legs. They are in a brick strewn yard with a tatty wall behind them, conceivably from Blitz bombing.

I have written about my quarantine and later pandemic pin purchases – a strange affinity for insect related items and also celestial, moons and stars, shooting comets, a pattern in my buying emerging slowly over several months. My fantasy life seemed to envision that I would return to the work world wearing jackets and that I would decorate the lapels with multiple pins of each – fly and butterfly pins, moons and stars. A yearning for the natural world? I have no idea. I had shown an affection for bees prior to the pandemic – bless their little organized hard working hearts! (My Queen Bee ring made for my by @murialchastanet_finejewelry shown below.) These pins were new affinities however.

Slowly this spring, the vision began to emerge as a reality. In fact I wear fewer jackets than I used to and the pairing is a bit more complicated than anticipated. However, the beaded butterfly pins (I wrote about these pins, made by British soldiers in internment camps during WWI, in a post here) have been a huge hit, although the celluloid firefly is a sure favorite. (That one came via Heather @marsh.and.meadow.) I recently acquired this nice fly below from yet another dealer (@therubyfoxes) at the same time I purchased a jewelry box from her (I wrote about the box in a post here), and it is perfect for somewhat subtle pairing.

What I had not anticipated is that in general I wear less jewelry than I used to in general. A strange shift in my vision of myself. One ring suffices where several used to routinely live. I have barely worn a bracelet since returning to the world – such as I have returned. However, I purchased two recently so we’ll see what happens.