Pam’s Pictorama Toy Post: Another toy today – and celebrating the acquisition of a new and unusual Felix no less. This fellow hails, at least most recently, from the United States. I have never seen this variation previously.  I spotted him on eBay and, although the bidding was robust, I would have been willing to pay more than I did for him. It is unusual for me to find a design I have never seen, given how much time I devote to looking at them I have seen most I think.

Some of the aspects of this Felix that are not immediately evident are a solidly sewn thread at the back of his head, and printing on his little red ribbon. My theory is that this Felix was a carnival prize which hung from that thread, now torn. (See back view below.) I wish I could read his ribbon, but maddeningly I think one half of it has smudged over time. I think it actually reads Made in… He is about seven inches high. If this gentlemen was a carnival prize, unlike his British counterparts which exist in large numbers speaking to broad popularity, he was not one that was widely distributed. His arms move, his legs and tail were meant to stand him up tripod fashion, although he seems to need some help. It is a very simple design, although the moving arms, glass eyes and felt ears speak to some care and expense. 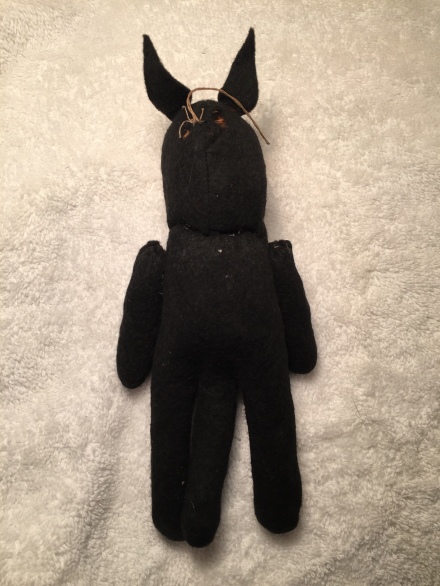 However, this benign faced fellow does not seem to belong to the same clan as those somewhat malevolent toothy grinned Brits. The argument could easily be made that he actually isn’t Felix, but a generic toy cat, but in all the looking at Felix I have done I believed immediately that he was someone’s off-model rendition, cheaply churned out for a cheerful Felix obsessed public. This mild mannered fellow has already found his spot on a bookshelf in our living room – a space that is starting to absorb the toy overflow from our cramped bedroom. Needless to say, I would have been very happy indeed to have won him at a fair. I can see a thrilled, small me, gripping him in one hand, perhaps some cotton candy or a candied apple (love those!) in the other. However, given my skills at those kinds of games, maybe I would have spent as much as I did buying him anyway.