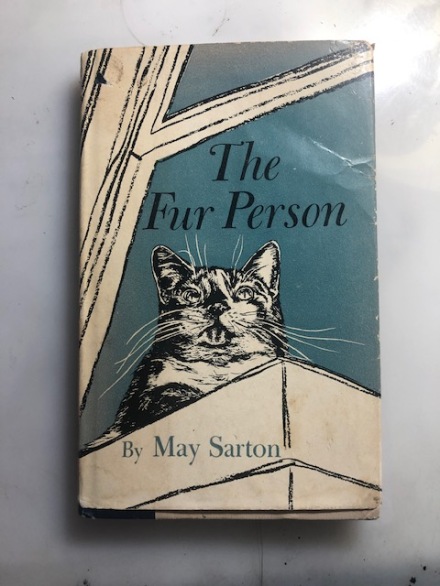 Pam’s Pictorama Post: This book was a prize when I discovered it and gave it to my mom, back when I was in college. Mom was reading May Sarton’s poetry and journals at the time. Being a keeper of kitties herself, the slim volume discovered in a used bookstore, devoted to and written from the perspective of Sarton’s adopted stray Tom Jones, was a score for a holiday gift for mom and quickly became a family favorite.

Some of the phrases Tom Jones uses to describe his world quickly integrated into the cat lexicon of the Butler family home and remain in use for many a subsequent generation of cats, both in New Jersey and the Manhattan branch, of which of course I am in charge. The kneading paws of our kits became starfish paws and a cat sitting in his or her favorite window, watching the world go by, is reading the newspaper. Even before discovering the book my mother had already christened our inordinately smart girl cat, Winkie, her Fur Child, and would allow that the sixth chair at the kitchen table was hers and Winks would perch there, ever politely. These phrases have been used so often I had somewhat forgotten their origin, traced to this book.

I hadn’t thought of the book in decades, but recently when researching and writing a Pictorama post, the memory of it nagged at the edges of my memory until I finally remembered it. The edition I gave my mother was a hardcover, early edition, much like the one I purchased for myself recently. I located an inexpensive copy online, hardcover and illustrated as I remembered, and it arrived quickly, a gentle explosion of mothballs and mold when opened. (It is still in print and also available in inexpensive paperback form, I believe, complete with the original illustrations by Barbara Knox, which I think you want to complete it, although I find them a tad uninspired.) I recommend it as an absolute must read for cat lovers.

Tom’s story is one of a stray tom cat who, as he comes of age, realizes the attraction of living with a housekeeper and sets off in search of an appropriate set-up. After abandoning the small boy who claims him as a kitten, briefly considering life in a grocery store, he ultimately determines that an old maid with a garden would be best suited to his needs. After some trial and error, he finds his home with not one, but two, old maids – presumably May and her partner, Judy Matlock, although only identified here as Gentle Voice and Brusque Voice.

Judy, Gentle Voice, is the first to invite Tom into the house and the one who names him; she is the cat lover in this family. May, Brusque Voice who smokes and is less likely to pet and coddle, eventually grows into loving the critter in their midst. She is the one who works at home all day, forging a special bond as shown when they both care for him during a serious illness – my guess would be a bad case of ring worm from the description. It is clear he has become central to their lives. (I can tell you that the cats here have an entirely different relationship with Kim who is central to their all day every day, although perhaps that is shifting some now that I have been pandemic installed here now for several months. That is a long time in cat days.)

May Sarton’s tone is indeed a tad brusque which keeps the book from falling into the saccharine, maudlin or childish. Tom Jones is a un-spayed male cat and Sarton gives a fair, if comical, view of what was on the mind of a young boy cat who came in off the streets. She also relishes describing the kitty joys of digging, tree climbing and has an especially entertaining interlude with his introduction to catnip. A novella, barely topping 100 pages, it is a quick read. It is a book that could be enjoyed by younger folks, but is written for adults.

My copy of this book, is inscribed on the inside cover with the name Mildred Krainock, Aug. 1957 in a neat script, written in pen. Despite a 1957 copyright, the fly leaf announces that this volume is in its third printing so the book was popular from the first. (May Sarton had already published a clutch of books – novels and poems – and was an established writer.)

As a book penned in the mid-50’s Sarton is both tongue in cheek with her language – she would have only been 45 when she published this book – but probably also accommodating a time when old maids would have been the most acceptable way of looking at two women living together. I don’t think Sarton was much bothered about keeping her sexuality under wraps even in those early years, but she assumes the mantel of an unimpeachable role for the times here.

I am happy to tell readers this isn’t one of those awful books where the denouement is the death of the pet in question, but while researching this book I realized that Sarton wrote it either just before or during the time she and Judy separate, as noted by Wikipedia, was in 1956. The book is dedicated to Judy and while the back fly leaf assures us that Tom Jones and Sarton continue to live together in Cambridge, MA, evidently in reality Sarton had left for New Hampshire after the death of her father by the time of publication.

While it is unclear where Tom Jones would have landed in their parting, the book implies that he is somewhat more fond of Judy than of May. I realized that I was enjoying the idea of their happy household, ruled by Tom at the the helm, continuing for years beyond the book, and was sadden by the knowledge that it was most likely written in remembrance and tribute, honoring days now passed, or passing. 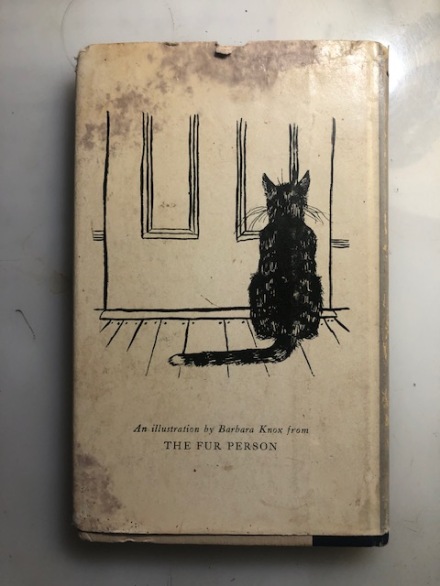