Pam’s Pictorama Photo Post: Today’s photo is one I couldn’t resist despite the price. It was one of my purchases on the Brimfield attempt at an online sale. Even with the seller coming down in price it was a bit dear. It is a tiny photo, about 4″x5″ which has the tell tale signs of a life spent in a photo album, indicated when you look at the corners carefully. It is an early photo, on brittle paper, somewhat lacking in detail with a flat cloudless sky. There are no notations on the back, perhaps because everyone knows this is Lucy, the Margate Elephant, residing in the town of that name located near Atlantic City, NJ.

Starting with a brief review of Lucy’s pretty fascinating history; this photo actually shows Lucy in her early incarnation – she was substantially renovated in 1970, a face lift which changed her appearance, and she required further significant repair after being struck by lightening, blackening her tusks, not many years ago. She survived Hurricane Sandy unscathed however which is remarkable considering the damage around her.

Lucy was originally constructed in 1881, by a man named James Lafferty who acquired a patent to make or sell animal shaped buildings for the duration of 17 years according to Wikipedia. Despite having tusks, an indication of a boy elephant, she was nonetheless dubbed Lucy at the dawn of the 20th Century. Sadly Lafferty died broke in 1898, forced to sell Lucy years earlier. 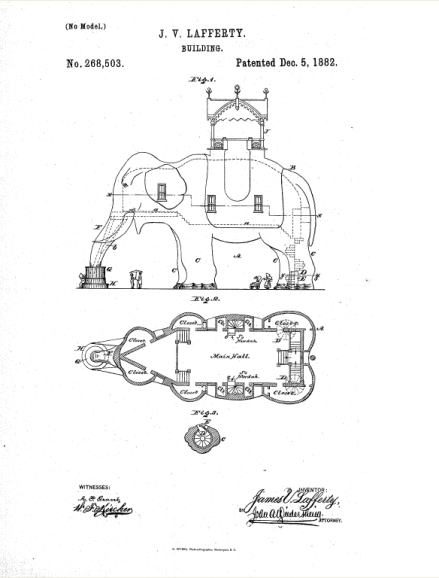 Lucy was originally constructed as an observation deck for this area south of the then thriving Atlantic City, but later did time serving in turn as restaurant, business office, cottage and tavern. She is 65 feet high and weighs about 90 tons, constructed with wood and iron bars, 22 windows are scattered throughout the structure. Although marketed as a hotel, the building nearby served that purpose, until March of this year when, in spite of her federal landmark status, the old girl became an Airbnb rental by the night.

Sadly the offer seems to have commenced via a listing on the rather fateful dates of March 17, 18 and 19, 2020 (assuming Wikipedia is correct), less than a week before New York’s stay at home order began due to the Corona virus and dampening tourism in both states, needless to say. While I assume that put the kibosh on it, but perhaps some lucky folks have done their shelter in place there.

One can just about make out what must have been the hotel, behind Lucy’s back, left flank in this photo. My guess is this picture was taken off-season, no tourists teeming around her and the wooden skeletal frames of booths of some kind below her have a distinctly out of season look.

I have always wanted to visit Lucy and somehow have never managed it. Despite growing up a Jersey girl, I have only made one or two trips to Atlantic City and few of its environs, over my life. It was a good hour and a half to two hours from where I grew up, probably less as the crow flies, but also with train service that only takes you so close. We lived in a beach community so there was little reason to pursue another. As I may have said before, because my father’s job as a news cameraman required peripatetic worldwide travel, and therefore our summers were spent at home enjoying the very local beach. Family vacations of any kind were almost unheard of and I was spared the sparring and whining so often described by folks my age when reflecting on such family trips.

As we hit mid-summer I am frequently side-swiped by a desire for the endless beach days of my childhood and this year the quarantine and subsequent ambivalence about travel, let alone crowds, have exacerbated it. The traffic and discomfort are long forgotten and a string of fresh mornings with the sun glinting off the water remain, tantalizing. As a non-driver (Kim does not drive either – we are a non-driving couple) it isn’t as easy as jumping in a car and heading there.

Still, a visit to Lucy remains on my eventual to-do list, although I do not dare to dream of something as wildly entertaining as spending the night within. (The idea that she was indeed home to someone at one time fascinates me and I like to imagine that. The incarnation as a tavern appeals as well.) Lucy is an enduring bit of Jersey lore and I will look forward to paying homage to her in person one day.