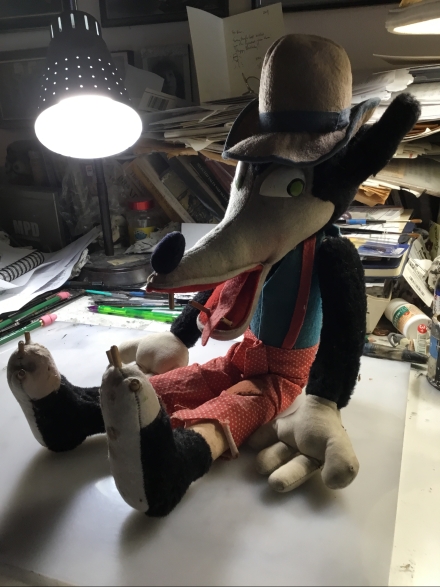 Pam’s Pictorama Toy Post: Today is a toy post in its full glory – dedicated to the recent acquisition of this absolutely extraordinary Big Bad Wolf toy! This wolf comes to me as a Christmas gift from Kim-as-Santa via a Bertoia auction. Mr. Wolf made a rather slow trip to Manhattan and just arrived the other day, but he was certainly worth waiting for and slow Santa by post is more than forgiven.

I’ll start by saying my yen for a wolf toy dates back to a street fair decades ago. This was a very mom and pop affair, just a single city block with German delicacies and an um-pa band mid-block. I was just passing through and stopped at a table and saw a very nice Big Bad Wolf puppet. Now, I was younger then and I made a mistake that I have tried not to make subsequently, and that is I walked away, to think about it. And yep, by the time I walked back, positive I had to have it, the puppet was long gone. She who hesitates is indeed lost and it lived on in memory. The one below is close enough, although I am unsure the one I saw that day was indeed Steiff. So, in a sense, I have waited all these years to fulfill my errant desire for a Big Bad Wolf.

Steiff Wolf Puppet, sadly not in my collection

Somehow, despite the world wide web and all, it was a mistake I have never rectified. I am, after all, a collector of toy cats first and foremost and generally that is what I end up looking for and at – living in a single room, I try not to follow my nose in too many other directions. However, while taking a very last minute twirl through this December auction, late one night, I saw this little guy and decided that he was sort of grand, toy lust kicking in. After a brief discussion with Kim the following day, we decided that if acquired he would make a fine Christmas gift. Lucky for us, everyone else seemed to have other things on their mind and he was acquired for a relatively modest sum. (You don’t want to know what toy collectors consider modest.)

Bertoia offered no real information on him however and, glorious as he is, he is without makers markings. If I had to go out on a ledge with a guess I would say maybe he was made by the Lenci company in the 30’s or 40’s? Lenci was an Italian toy company from 1919 to 1944 founded by Elena Scavini (her nickname was evidently Lenci) which is better known for regulation dolls. At least one individual has identified him as such on the internet, although I remain somewhat unconvinced. I will continue to research and am open to any suggestions or further discussion.

Dating on either side of my Wolf I found this very nifty Knickerbocker example which is earlier and although more primitive I would have snatched up in a minute as well. This one, shown below from a Hake’s auction back in 2013. I find his bear-like simple look very appealing in a different way. 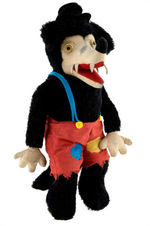 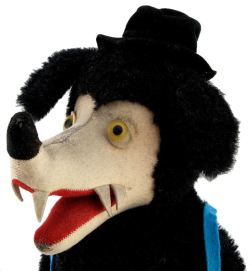 Hake’s also had this listing shown below for a later Lars Wolf, probably made after mine, and Three Little Pigs.

Better view of the Lars version.

This lead me down a charming rabbit hole of Mel Birnkrant’s website (always a great read) and his great story about acquiring his Lars Mickey, Big Bad Wolf and other toys. It can be found here and I highly recommend it. Mel did a drawing for a really smash up alternative version shown there as well.

Meanwhile, I also include an alternative universe Wolf that appears to be an unlicensed version, but clearly got around as I found several examples. It is shown as listed on Morphy’s auctions below. It might be a slight exaggeration to say these abound, but they seem to get around more than some of the others. I especially like his tuxedo!

Back on my birthday in 2018 I purchased the Little Pig below and wrote about him here.

Getting to the main event, my doll has some really splendid detail such as his felt tongue sticking out. I love his strangely spiky toothies and toy nails. He appears to be made of wool felt with cotton clothing and hands. His pre-tattered clothing has a few repairs and there are some moth holes on the soles of his feet, but otherwise he is in remarkably good shape. Details include some delicate coloring in this cheeks and on his toes and those strange painted eyes and I have to say he made me laugh out loud when I first unpacked him.

He is unexpectedly articulated with a head that turns a bit and arms with full range; he does not stand as his legs are not movable and is permanently in a seated position. He is very jolly though and cheered me up immensely while confined to bed with my bad back this weekend. 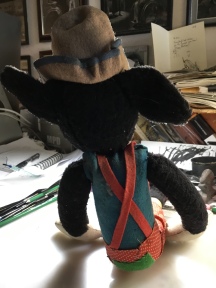 Of course this post would be utterly incomplete without a link to the Silly Symphony Three Little Pigs and Big Bad Wolf which can be found here and here. These cartoons elevated our Wolf to ever greater fame, one way or another, inspiring all of the toys mentioned here. And I, at last, have a great Big Bad Wolf of my very own.