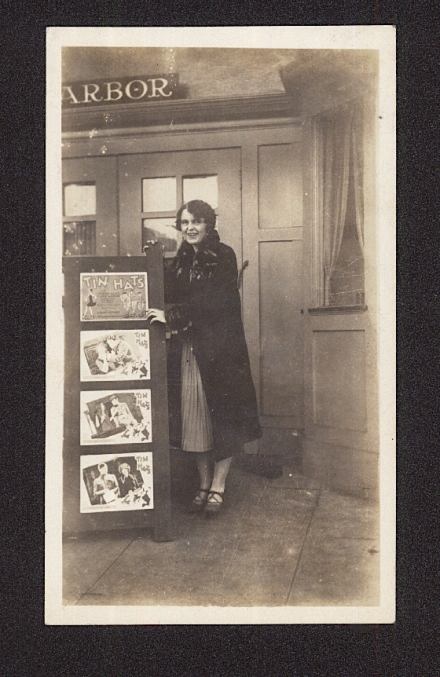 Pam’s Pictorama Photo Post: I stumbled onto this photo, somewhat outside of my usual bailiwick of cats and toys, and purchased it for its slice of life from the past quality. The woman is identified on the back where, despite evidence that it was pulled from a photo album, the neat pencil writing is still legible, April 1927 Marion Goodall 1495. West Adams Street.

Marion, in her best bib and tucker, stands next to lobby cards for Tin Hats which, according the the IMDB database was a WWI comedy, made in 1926 starring Conrad Nagel and Claire Windsor. Although partially lost there is a rather detailed outline of the plot penned by a devoted individual who took the time to do so. (The author had seen some of it and filled in with a period description.) Roughly, it is a comedy farce that follows three soldiers who somehow get separated from their army unit in France just as the armistice is signed, and acquire bikes as a mode of catching up to them. Along the way, one falls in love with a German woman, they drink a lot of beer, and are hailed as heroes of the Occupying force (yes, there was a time when the French were really happy to have us there) and essentially have a jolly time of it. Spoiler alert – everyone gets happily married in the end.

Tin Hats was directed by Edward Sedgwick and his sister Eileen has a lesser role, as a second love interest. As an aside, Eileen’s twin sister was Josie Sedgwick who was a bit more of a rip roarin’ good time according to Kim. (A morning discussion about the merits of Josie is taking place as I write this.) The twin girls were born in Galveston, Texas on March 13, 1898 to a theatrical family which had a vaudeville act which ultimately incorporated the children, The Five Sedgwicks. While the girls were eventually plucked from the act, Edward on the other hand completed a university degree, went to a military academy, and contemplated a career in the military, before deciding to follow the family path into the theater and films as a director. Although Eileen made more than a hundred films (mostly serials) neither of the twins makes the transition into sound. Josie ultimately opened a talent agency. Eileen lives to be 93. Edward continued to work as a director however, until the 1950’s. His last listed credit is an episode of I Love Lucy in 1953.

Meanwhile, Marion Goodall’s interest in being photographed with these lobby cards is now lost to us. In her strappy shoes, good coat and with her marcel curled hair, she is indeed a snapshot of a woman of her time. More and more I notice silent films that are slipping into the category of having been made 100 years, or more, ago and even in my lifetime that seems amazing. It didn’t seem like they were made all that long ago when I started watching them with my dad in the 1970’s. These films, photos and music of the time remain little time capsules, ready to transport us back in time, at least for the flicker of a moment and these days at the touch of an internet button.