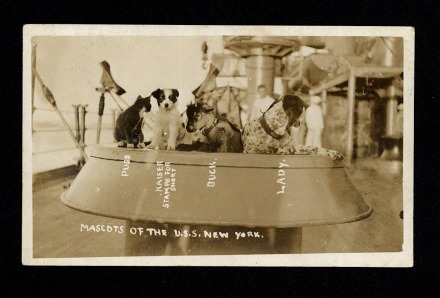 Pam’s Pictorama Photo Post: Photos of cat mascots on ships are becoming a sub-genre to my collection. Prior incarnations have included: Tom the Fire Boat Cat, Ahoy! Cats at Sea and Mascot – U.S.S. Custodian. I find them utterly irresistible, the beloved cats of the sea, and this ship clearly had a full menagerie on board! The U.S.S. New York seems to have a current incarnation of very recent vintage, so it is hard to know from what era this version hails – although the style of the photo postcard makes me think the 1920’s. The postcard is unused with no writing.

The simply named Puss, gray tuxedo, has his back to us – or perhaps is giving that adorable fluffy pup, Kaiser Stamps for Short, a look before starting something with him, like a bop on the nose. Lady, like her name is clearly elegant and above the fray, also turned away – and then there is the goat, Buck, who I really love. Whose idea was it to bring a goat on board? Buck and Kaiser are the only ones looking at the camera. Buck, like Lady, appears to wear a collar – a goat with a collar, does that happen often? He would seem to be a smallish goat from what we can see. I can’t help but wonder how hard it was to get them to all pose together.

In theory, I find goats charming. I say in theory because I have never attempted to get too close to one and I understand they can be temperamental. When I was in Tibet years ago I saw tiny, doglike goats, the size of Scotties, all over the place. Of course they were extremely sure footed and would run up and down the mountains, and we often saw small herds of them belonging to farmers. I believe that they make cheese from milking those tiny goats. The goats always seemed to be high spirited and romping around. Cute though they were I wasn’t risking injury by goat while hiking on the Tibetan plateau so I did keep my distance. (It should also be noted that in Tibet I found very few cats and many, happy dogs. The dogs hung out at the monasteries and the monks would feed them tsampa, made of barley flour and yak butter rolled together. Perhaps that diet is why there aren’t many cats.)

The notion of mascots is interesting – animals bringing luck and ships often sport them, hence my growing photo collection. I wonder where that tradition came from originally. I read that inanimate things were the first mascots, such as mastheads on ships. It then morphed into living animals. I happen to be of the general opinion that you need all the luck you can get on a ship. With four mascots the U.S.S. New York was taking no chances.