Pam’s Pictorama Photo Post: Mysterious applications of Mickey and Felix as costumes really could be their own category! Starting with this is a tiny photo which really defies easy explanation – someone dressed as a long-nosed, slightly off-model (paunchy) Mickey on skies or snow shoes.  Hard to imagine what was going on here, or that he remained standing long.

Back of card reads (complete with lack of punctuation):

mother
am glad it is much cooler now but our place is cooler inside than out.  The children had their carnival yesterday but this is the one.  Will

This Felix costume is much jollier and a lot more sensible – as such.  I’m sure he raised a lot of money for them. In fact, so much, that they did it more than once! 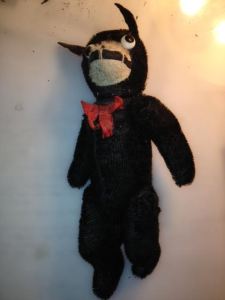 This card features stuffed Felix dolls for the action – mine of this type is posted too so you can get a better look – irresistible to put these together – another example of rather brilliant photo collage work.  Nothing on the back of this card so we don’t know which came first.  They were purchased separately over the course of several years and the seller of this card said he had never seen anything like it.  I sent him a scan of the other – both of these came from British sellers.  I say Hooray for Felix!