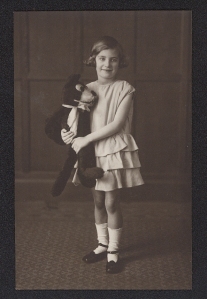 Pam’s Pictorama Photo Post:  It doesn’t surprise me that, if you had a wonderful Felix the Cat doll, you would want your photo taken with it. As many of you already know, my collection in this area is fairly deep.  (Some of it was already immortalized and shared in an early posts, Felix Makes the Picture Better and more so in Ugly Children Good Toys.)  Shown here is a little girl dressed in her finest, holding a delightfully large Felix doll and looking mighty pleased with herself.  It is a photo postcard and nothing has been written on the back. Her Felix is a more pristine example of one I own – I am sparing you a photograph of me holding it!

The other card has a small holiday riff and I will use it as a tip of the cap to the newly launched 2014 holiday season. It is hard to see, but the tinfoil greetings has an impression of holly around it.  This little fellow had to pose in his winter clothes (and hat) in front of a very soft focus bit of outdoor scenery.  Note those snappy buttons on his trousers though! He’s dressed up too.  His Felix on the other hand is an absolutely whacky pop-eyed fellow.  Love those ears standing straight up – part bunny! This also unused and perfectly preserved.

I have wondered if these toys were just props at the photo studio. For some reason the little girl has always struck me as the owner of that Felix, the little boy perhaps not. Maybe because it is a bit less clear that the girl is in a photo studio – the portrait could have been made at home.

Those of you on Facebook know that I can’t resist posting a photo of me with new toy acquisitions. A natural impulse I think – representing a long tradition of proud ownership. On the other hand, who wouldn’t smile in a photo studio if they handed you a huge Felix doll?  I would!