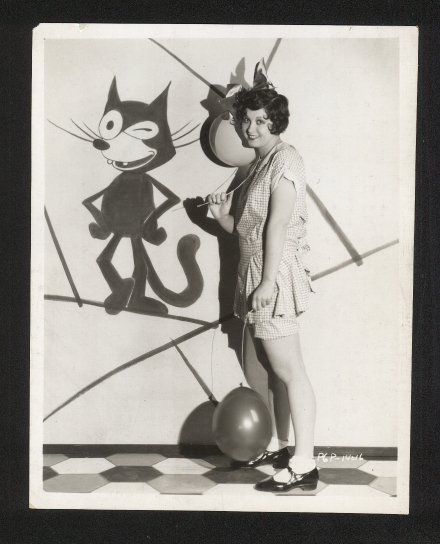 Pam’s Pictorama Photo Post: This photo found its way to us via Tom Conroy – a friend of Kim’s who has generously sent us many wonderful photos from his collection. Thank you Tom!

Many variations of this photo session abound on eBay and can be found on the internet. Interestingly, this exact image does not appear on the Google photo file. (Although I guess it will now.)  The actress is generally identified as Helen Kane, but Kim was thinking May Questel which lead to an active Google search and discussion in bed with the iPad the other night. Kim leans seriously toward May Questel. I include period photos of May and Helen and I would say it is a tough call indeed!

The question of why Betty Boop is posing with Felix is another one. Clearly there was Betty/Felix empathy – as shown in my post, The Strangeness of French Betty and Felix. Speculation is that at some point the properties were owned by the same company and this low level promotion occurred. Still, as you know, it has long been my philosophy that Felix improves anyone’s status – and we know that Betty had a long-standing affection for dogs, so why not a clever cat?

As a point of strange symmetry (and because you can never have too much Felix) I offer this early photo postcard of a man posing with a Felix cut-out. This has a place of honor with my collection of photos of people posing with large stuffed Felix dolls. I have always guessed that this photographer could not afford a proper stuffed Felix to pose with and did his best.