Pam’s Pictorama Post: This is the only Victorian trade card I own of this variety. It is a bit hard to see, but the top says, Ha! Tis Me. The Maltese Me Rival. I do not claim to understand it – I just liked the image of this great frowning striped kitty forced into this very flat perspective – look at his claw paws and an angry puffy tail! On the back, in tiny type, is an exhaustive list of The Great Atlantic and Pacific Tea Co.’s Branch Houses in the U.S. – with almost a third of them in New York City – and a notation at the bottom that the Principal Warehouse, 35 and 37 Vesey Street, N.Y.  P.O. Box 4233. It is a tiny card, about the size of a playing card.

The Great Atlantic and Pacific Tea Company, founded in 1859 as The Great American Tea Company selling tea and spices at discounted prices in New York City, changed its name in 1869 to commemorate the first transcontinental railroad. Much to my surprise, the company morphed first into the A&P tea company and ultimately A&P supermarkets of today. (Kim seems to have known this all along – fascinating man my husband.) All I can say is, they sure would get more of my business if they had kept this ad campaign. They were generous in their distribution of Victorian trade cards and there seem to be more than you could imagine once you go looking. Scores for sale on eBay at any time – their survival rate a reflection of their popularity during their heyday.

Our friend the Internet supplies us with much information on the specifics of the cards and story. The folks over at http://www.thepethistorian.com have a nice little essay on the subject. The cards were printed by A.B. Seeley, copyrighted 1881. This one appears to be the second in a group of six and represents the story of a girl cat, romanced by the street cat, but who waits for an upperclass Tom to come along instead. He beats up poor Mr. Street kitty – who ends the series bloody, but not bowed and trying to convince us that he won this fight. (I am snatching just that final image for your entertainment below – wouldn’t mind adding that one to my collection.) The language on the cards seem to be references to poems and other things that would have been recognized by people of the day – but overall it is a recognizable cat tale of love and love lost that is pretty easy to follow and appreciate. 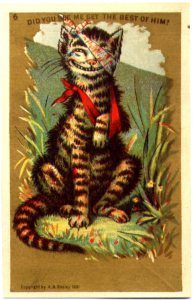