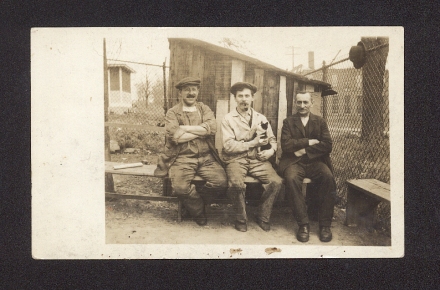 Pam’s Pictorama Photo Post: I guess it wouldn’t surprise anyone to find out that I have a soft spot for photos of men and cats. There’s something about these big tough guys scooping up their cat when their photo is going to be taken that I particularly love. (Previous examples in this category would be my posts Men in Hats with Cats and Tricks) In this one the great little tuxedo is looking up at the man adoringly. Nothing on the back of the card, a bit grimy. There’s a strange symmetry – two of the men wearing matching hats (a third hat is strangely hung high on the fence, does it belong to the man on the end?) and the men on each side with his arms across his chest in an identical pose. Love me, love my cat!

While I was growing up, my father seemed to only have a passing interest in the parade of cats that populated our world and I cannot recall a photo or image of him holding one of them. There was one or two he was perhaps a bit more partial too – our first cat Snoopy comes to mind. And there was tell of a cat he and my mother had before us kids were born, named Nudge, another orange striped fellow, who would hide and jump out and attack my father. (Never my mother – orange striped cats tend to be one person cats. Having said that, my father ultimately took up with my orange tabby, Pumpkin, after I left home and fed him smoked salmon from the table on a regular basis. Needless to say, they were tight.) My father neither objected to, nor paid a lot of attention to the cats of our lives. The German Shepard, Duchess, was his dog though and would wait by the front door for him to come home – even from long trips.

However, after retirement my father has, in many ways, gradually become the center of the Butler cat universe in NJ. Sitting on his lap is a prize spot and several denizens expect brushing and other attentions. There is another great orange cat in residence presently, Red, who adopts me for the night when I visit, on leave from my father’s room, to spend the night on my bed. (Don’t the Japanese have inns where you can rent a cat with your room for the night? Or am I conflating something else with the tea houses where you can go and pet cats?) During numerous visits last year when my father spent some time in the hospital, my mother (Queen of the various animals, domestic and otherwise, of their house) and I tended to many of the various cat needs – a visiting cat outside who needed feeding twice a day, one example – but they missed my father’s presence very much. That was about the time Red first adopted me, I guess he needed me and he has not forgotten me since my father’s return. Below is a photo of him on my father’s lap, and another of him watching over me in bed in my childhood room in NJ. Good kitty!

3 thoughts on “Men and Cats”