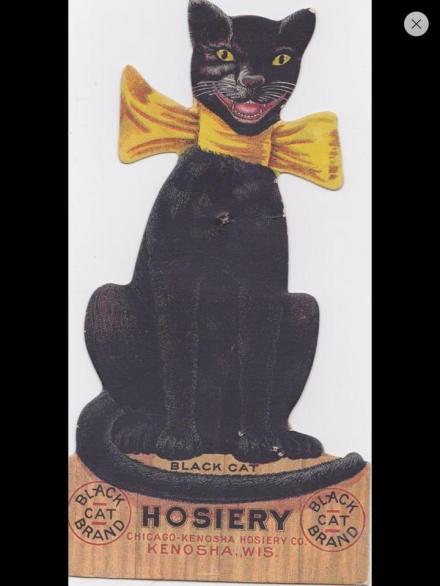 Pam’s Pictorama Post: We all know it – cats sell! Here are two classic examples. I fell hard for the Black Cat Hosiery cat early on in my collecting days. He’s popular and the large free-standing displays go for big money. This was an early acquisition for my collection and he sits framed on a wall over my desk at home. He has a stand tucked behind him that makes him free-standing as well. Sadly over time the company moved to just a black cat logo – nowhere near as compelling as this fine feline. Our cat Blackie bears an extraordinary resemblance to this fellow, despite have a white spot or two that would show in this pose. Blackie is among the few cats I have known who has a distinct smile. Perhaps because he is so black around his mouth you can see it clearly – when cats smile they show their fangs though. Some people may not think it is the friendliest of looks – but we know he means well. 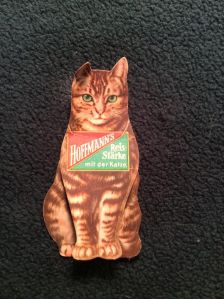 I have paired our hosiery friend with this serious German chap advertising, of all things, rice. It seems to translate as Hoffmann’s Rice, Starch with the cat. I gather starchy rice was viewed as a good thing under the circumstances – I wonder if there’s a word pun that translation isn’t sharing with us? As far as I can tell this rice company eventually morphed into one that still exists internationally today, but I am not entirely positive about that link. Meanwhile, this little piece of advertising is especially pleasing – as a result they are fairly ubiquitous it seems. People kept them. You can probably see that he too is meant to be freestanding by moving his feet forward. I bought this particular card at a flea market in Berlin around ’07 – they were inexpensive and plentiful there. He is a classic bit of advertising and it is easy to see why both of these were beloved and survive in large numbers even today.

Pam’s Pictorama Photo Post:This was a surprising find – it is a press photo of the Our Gang kids. It is dated July 28, 1925 and says, The Cleveland News, Reference (something I can’t read) Cleveland, Ohio. Also written on the back it says, Don’t Hitch Your Wagon to a Star! Try a Skyrocket! Here are the diminutive Pathy comedians of Roach’s “Our Gang” celebrating the Fourth in their own fashion. Quite the fire crackers, yes? I have always thought that if I was going to have a still from Our Gang that I would want one of the crazy machines or cars in it and this is pretty dandy, even though it isn’t a still, but a photo made expressly for this purpose. I just wish they could have gotten Pete up there too! The photo is a collage montage of images and the “flames” shooting out the back and the lines indicating speed seem to have actually been scratched onto the negative. Very resourceful.

Like many people, I guess, some of my earliest television memories is a wonderful, never-ending unspooling of Our Gang and Little Rascal shorts on weekend afternoons. These films informed our childhoods and convinced us that we should have a neighborhood gang of kids and dogs, and be capable of building glorious fire engine go-carts, our own taxi cabs, other cars, and club houses – and sit around eating huge cream puff donuts the like of which you never see in real life. (Having said that, I actually finally had a cream puff donut of the kind I am describing the other day – it was on special at Le Pain Quotidien and I split it with a friend – absolutely glorious. I now understand why they were always longing for them in the shorts.) It was years before it occurred to me that those wonderful go-carts and club houses were built by talented adults with virtually endless resources – not a superior kind of extinct child from an earlier generation. It was probably good to have the bar set high however.

Although I watched them all with impunity, it was the earliest generation of them that I liked best. (However, I did not catch up with the silent ones until adulthood so I am thinking of the first generation of sound ones.) I loved this image when I saw it and it set me thinking about a short where they do indeed build a rocket and take off around the neighborhood. Surely there was one like that, wasn’t there?