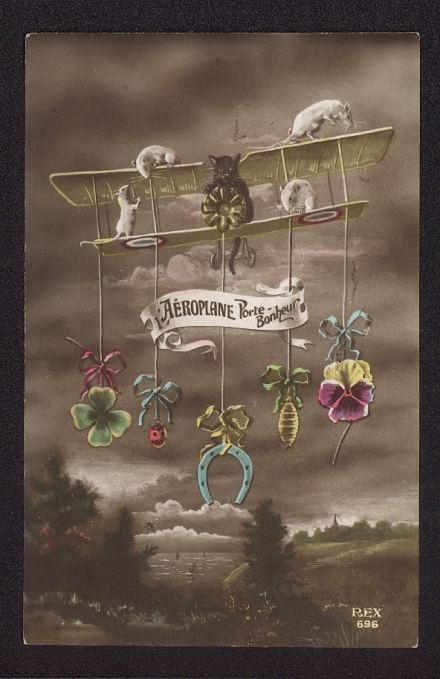 Pam’s Pictorama Photo Post: Our friends over at Google translate this as Lucky Airplane and certainly they are taking no chances! Bedecked with every lucky symbol, as well as a few I didn’t know, such as the ladybug (I know it is bad luck to kill them) this is a plane promises quite a ride. I admit I’m not sure what the thing that looks like a beehive or the pansy-thing are – I’m open to suggestions – and everything is tied with a bow which is a nice touch. The black cat is obviously lucky (see our recent post Lucky Black Cat if you have any questions), although the fact that he’s peddling this plane into flying seems a tad ambitious and he does appear to be concentrating.

I had to cast around a bit on the subject of those industrious looking white rats as lucky. Logically though, rats are seen to have a sixth sense about danger and death, so I guess if the rats are satisfied all is good and these are all but dancing on the wings.

This card belongs to the same family as the one featured in Speaking of Cats which I show here below. These seem to be WWI genre cards – different companies, Rex 696 and the one below by Idea.

I have included the back of the card, and perhaps a French reader will be kind enough to send us the gist of it, as it is too densely written for me to begin to translate. Despite the writing, it does not appear to be postally used or properly addressed which also does confuse me. However, for  now I just say, Up, up and away!