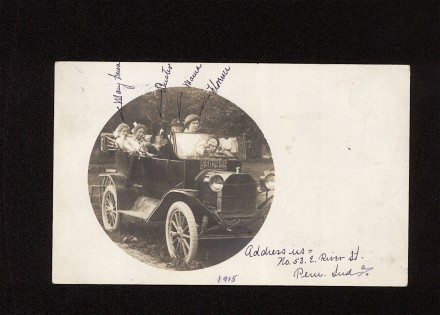 Pam’s Pictorama: As happens occasionally, but not often, this card has been made better by the writing on the front of it. Usually I find this an affront, but in this case, the very neat, legible hand naming each of those seated in this grand, shiny auto and informing the recipient to Address us = No. 53. E. River Street, Peru, Ind and 1915. She, Florence it turns out when we turn the card over for signature, has written in Mary Lauren (?) Buster, Maura and the penner of this card and driver of the car Florence. On further reflection, I am going to assume that the two girls are Mary and Lauren, obviously sisters, large bows prominent in their hair. Maura, elder statesman, with a jolly hat to keep the sun off in this open car. Of course, Buster, sharing the front seat, is all excitement for the adventure, and Florence, also with hat, at the wheel.

It is hard for us to remember today that a woman (women, although I think we can assume that Florence probably was the only driver here) driving, let alone for long distances, was something to talk about in 1915. I am fresh off of reading the Automobile Girls series and all seven novels are based on that idea. A young woman and her friends, chaperoned by an aunt, drive around the country on road trips of various kinds, written in 1910 and forward. (This photo of Florence, Maura, Mary and Lauren could more or less be an illustration for the book now that I think about it.) Driving was part of the emerging modern woman and it represented a great freedom women did not have previously – and one that was not universally approved of. You were a certain kind of spunky, modern gal if you were going to drive, let alone make this sort of road trip. And road trip it was – the back reveals that they drove from Pennsylvania to Peru, Indiana. A stop in Buffalo is mentioned and we assume there were a number of others.

As it happens, I do not drive. I have a driver’s license, but never drove much and now my many years of living in Manhattan has rendered me a non-driver. However, I can appreciate the freedom of driving – or even riding a bicycle for that matter. It was an important part of the great emancipation of the American woman. 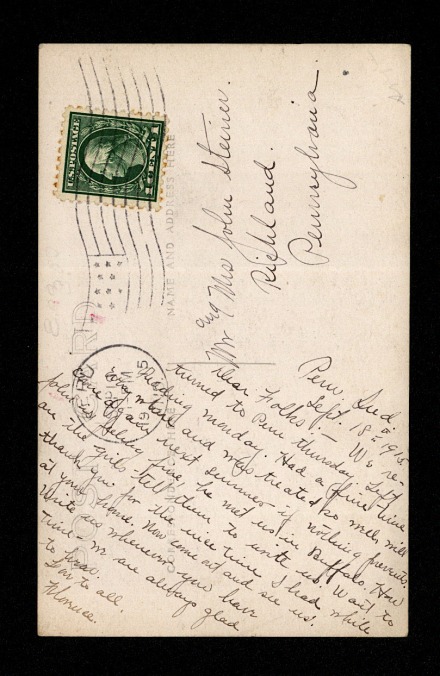